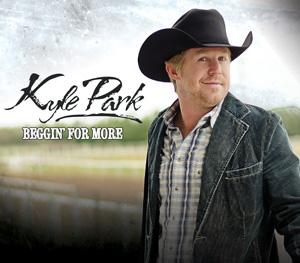 The current generation (hell, make it every generation) of Texas songwriters can more or less be divided into two camps: those aspiring to the for-the-sake-of-the-song gold standard of Van Zandt, Clark, Shaver and Co., and those obviously gunning for frat and sorority crowd-pleasing hits, the more “Drunk Girls” in the crowd singing along to songs like “She’s Like Texas,” the better. Stylistically, Kyle Park definitely leans more toward to the later camp than the former; but based on the considerable amiable charm and genuine talent on display throughout Beggin’ for More, he stands head and shoulders above the competition. On slick and catchy songs like the surging opener “The Night is Young” and the sweeping, bittersweet “True Love,” Park sounds as groomed and ready for modern mainstream country radio as anyone this side of Keith Urban, but at heart he’s clearly a traditionalist in the George Strait mold. That much comes shining through not only via the pure-country feel of standouts like the winning title track and “Fit for the King,” but in the tasteful playing and arrangements throughout the album (which Park produced himself, smartly picking real-deal studio players like Cindy Cashdollar on dobro, Tommy Detamore on steel guitar, and Asleep at the Wheel’s Larry Franklin on fiddle). In their hands, not to mention with Park’s assured delivery and aw-shucks likability, even “Turn That Crown Upside Down,” a spot-the-clichés drinking ditty co-written with Josh Abbott and Rich O’Toole, plays out like more of a legit honky-tonk anthem than ballcap bait. Ditto “Tagged,” a silly but disarmingly fun, tongue-in-cheek lament on the ever-present camera eye of social media. It may not be songwriter’s songwriter top-shelf stuff, but modern country music — especially the Texas variety — could stand a lot more of what Park is pouring on Beggin’ for More. — RICHARD SKANSE