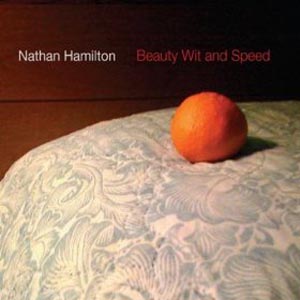 Nathan Hamilton has come to confess what every singing poet who has every crafted sentiment into song has known: “Sometimes,” as he sings on his latest album, Beauty Wit and Speed, “you gotta fake it until you can believe.” Because the Abilene native and 2000 Kerrville New Folk Winner has arrived at a destination many songwriters set off for but few reach: bold, stark, simple and beautiful truth.

It’s a trite cliche, “less is more,” but true nonetheless, because as Hamilton has cranked out fewer steely, twangy songs steeped in those familiar but — let’s be honest here — tired ’ol red dirt-dyed motifs, he has revealed more and more of himself.  As Hamilton says, “While in the past, I have written songs about outlaws and bar fights, my days of late are more realistically filled with swim meets and car seats. The seemingly ordinary and mundane often holds a galley of riches.” But fear not. These aren’t the sappy musings of a hipster guitar dude new to the chores of parenting and going all baby gaga over his adorable offspring’s tiny little toes. These are the songs of a man who is thinking long and hard about the passing of time, the intimacies we cherish and the connections we lose with each calendar turn, and the memories we leave behind.

With a voice that resides somewhere between Jackson Browne and Sam Baker — and songs that could have easily been penned by either — Hamilton has evolved into a confident songwriter who, one senses, labors intently over every ounce of syllable for authenticity and efficacy. Today, Hamilton wastes precious few words, delivering songs of compact precision that dramatize the honesty at their core. Nowhere is that more evident than on “Rust of Age,” a gorgeous reflection centered on a mournful muted trumpet, a plaintive piano and an elegant observation that “we all must face our grave mistakes of body, mind and soul, but I believe I’ll take the dirt and leave behind the hole.”  On “Roadside Prayer,” a song that builds from a stark solitary strumming to a Joe Henry-like lushness in the chorus’ admission that “I fear that I may fail you, though I pray it isn’t so.” And on “Days of Caution,” which finds Hamilton joined by Amy Cook in celebrating that “the end is the beginning, there is grace enough to spare.”

Faking it no more, Hamilton is making believers of us all.  — GLEASON BOOTH

Next post Various Artists: "The Lost Notebooks of Hank Williams"