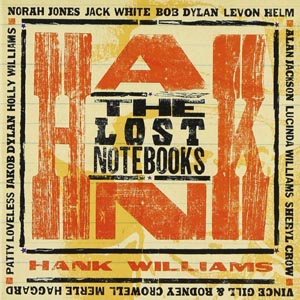 When Nora Guthrie first came up with the idea of having musicians breathe life into her father’s unused words, correctly insisting that the folk music tradition was all about evolution, the result was two fine Mermaid Avenue albums by Billy Bragg and Wilco. The concept works slightly differently on The Lost Notebooks of Hank Williams, for which Bob Dylan recruited participants to spin Williams’ words into worthy tunes.

In this case, there’s more of an effort to stay true to Williams’ high-lonesome country roots than to use his work as a springboard for exploring new territory, as Rob Wasserman did on another fine Guthrie “collaboration,” Note of Hope. That’s OK, though. Williams’ progeny have already taken care of carrying his legacy wherever they may (whether it should go there or not). Still, while all of these artists deliver credible contributions, some evoke Williams’ memory more powerfully than others.

Alan Jackson gives a convincing Hank feel to “You’ve Been Lonesome, Too.” Levon Helm also conjures a nice Hank vibe on “You’ll Never Again Be Mine,” though the backing vocals could be lighter. Jack White puts on his hurtin’ voice, but sounds a little too affected on “You Know that I Know.” And Merle Haggard sounds more like late-era Johnny Cash on the closer, “The Sermon on the Mount.”

Jakob Dylan’s voice rings clear and sweet on “Oh, Mama, Come Home,” unlike his dad’s croak on “The Love that Faded.” Sheryl Crow, who’s turned into quite the country vocalist, gets the catch in her voice just right, then lubricates it with a little honey on the lullaby-like “Angel Mine.” Norah Jones, another balladeer who knows her way around a country tune, offers a smooth “How Many Times Have You Broken My Heart?”

Patty Loveless certainly holds her own on “You’re Through Fooling Me,” and Vince Gill and Rodney Crowell deliver an interesting duet on “I Hope You Shed a Million Tears” — on which Crowell does the talking stanzas and Gill sings the rest. But the most outstanding moments come from Holly Williams, Hank’s granddaughter, on “Blue Is My Heart,” and an unrelated — biologically, anyway — Lucinda Williams on “I’m So Happy I Found You.” More than any other artist here, she really inhabits the song, instead of simply singing it. And even though it’s about happiness, her delivery is as mournful as Hank’s at his saddest. That’s how a true tribute sounds. If there’s a follow-up, maybe she and Holly should share the honors. — LYNNE MARGOLIS