Mike and the Moonpies: “Steak Night at the Prairie Rose” 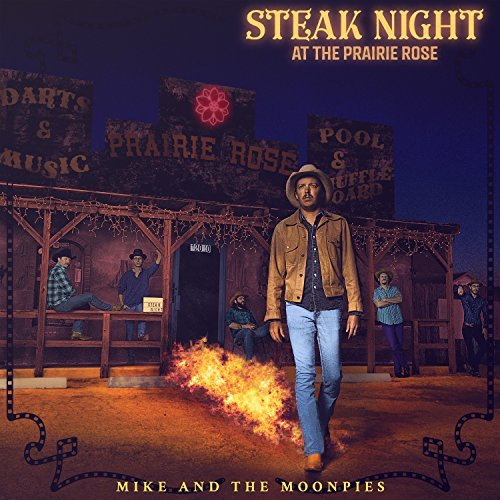 MIKE AND THE MOONPIES
Steak Night at the Prairie Rose
www.themoonpies.com

In a scene arguably most heavily influenced by heartland rock and lyrically-driven folk, real-deal honky-tonk music sometimes gets lost in the (no pun intended) shuffle. Sure, there’s a handful of Dale Watson-eque purists, and some solid classic-country ingredients in the styles of Jason Boland & the Stragglers, Kevin Fowler, Randy Rogers, et al. But if your vision of independent country music hews more towards Merle Haggard and Gary Stewart than Bruce Springsteen and Guy Clark, Austin’s Mike and the Moonpies have as good a chance at any at filling the Cooder Graw-shaped hole in your honky-tonk heart.

One of the many good things about the Moonpies — fronted by singer-songwriter/guitarist Mike Harmeier — is that they don’t treat country music like a fragile museum piece that can’t handle some roughing-up and experimentation. The funky, distinctive keyboard work of John Carbone, for starters, might not sit comfortably on a classic ‘60s country album, but it’s an invaluable ingredient on Steak Night At the Prairie Rose. Its indelible interplay with the lead guitar of Catlin Rutherford and Zach Moulton’s deft steel guitar work certainly lends the Moonpies a sonic stamp that helps distinguish them from other bands mining similar veins, whether they are going for broke on a hot-picking throwdown like the opener “Road Crew” or taking a subtler tack to push the lyrics on the wistful likes of the title track or the waltzing “The Worst Thing.”

Sometimes retro-country acts are guilty of keeping things a little too simple, and/or stacking their lyrics with anachronisms to show just how seriously they’re taking the whole affair. Harmeier avoids such limitations: in keeping with his band’s (and gifted producer Adam Odor’s) tasteful balance of the old and new, his best songs manage to feel either timely or timeless. The title track follows a father-son relationship through a few decades of barroom camaraderie with a sure storytelling hand (there’s a little Guy Clark in there after all); “Road Crew” and “Things Ain’t Like They Used to Be” tackle life on tour with edgy humor; and “Wedding Band” scores one of the still-young year’s best lines with “we bring our own sound and lights/we’re way too loud but we ain’t too bright.” If you’re looking for a downside, one could argue there’s one too many songs about being a musician, or that the pot anthem “Getting High at Home” might make for a hot live number but the buzz wears off pretty quick. Then again, songs like the bracing gambler ballad “Beaches of Biloxi” and the lovesick “The Last Time” hit home no matter how much time you’ve spent in a tour van. Taking the new album as a whole, not to mention the increasingly solid albums that preceded it, Mike and the Moonpies have got both the sizzle and the steak. — MIKE ETHAN MESSICK