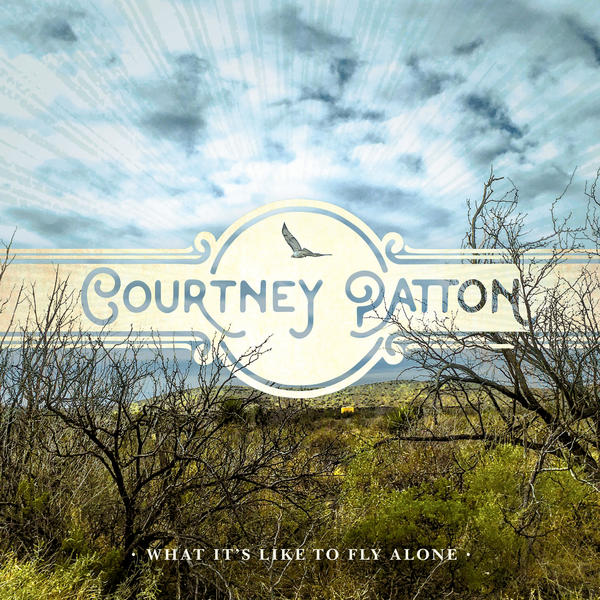 COURTNEY PATTON
What It’s Like to Fly Alone
www.courtneypatton.com

For all the ways in which mainstream country music and its more indie-minded alternatives compare, contrast, and intermingle, none of them have done a great job of spotlighting the worthwhile female artists working in their genre; if anything, the independent Texas/Red Dirt wing has left them more outnumbered and underpromoted than Nashville ever thought about doing.  Identity politics might not be the most fun way to kick off an album review, but it does lend some extra gratitude for some new music from Courtney Patton, one of the few women to gain some real traction in recent years on the regional country music circuit.

And the traction’s been earned on her own terms; unfettered by a need to compete with the biggest and loudest bros on the block, Patton instead holds her own nicely filed alongside the more autumnal, writerly likes of Drew Kennedy, Owen Temple, and her longtime friend and frequent tourmate Jamie Lin Wilson, all of whom she’s collaborated with. Comparisons to her most conspicuous collaborator, her husband Jason Eady, are inevitable and mostly appropriate: she shares his knack for focused, unhurried delivery. But while Eady has taken a turn towards pure-country orthodoxy in recent years, Patton echoes a strong strain of classic pop-folk writers like Carole King and James Taylor in her voice and writing.

Given Patton’s natural twang, though, What It’s Like to Fly Alone can’t help but be a country album, albeit “country” from a more mature and rooted place than you even tend to hear on Texas-friendly radio stations. World-weary heartache has been Patton’s default from the get-go, but she stops short of wallowing. The sprightly opening number “Shove” and the lonesome-yet-assured breeziness of the title track start things off on an optimistic high note, and even the guilt-ridden broadside ballad “Round Mountain” comes off pretty bracing thanks to narrative momentum and indelible bluegrassy picking from the likes of Lloyd Maines and Heather Stalling. Maines’ chops on steel, mandolin, dobro and guitar are as indispensable as always, and the fact that Texas’ most beloved independent producer is on board but Patton still takes the helm as producer speaks volumes about her growing confidence as an artist.

She’s not too proud to co-write though, with gifted alt-country songwriter Larry Hooper taking a prominent role on four collaborations (including the aforementioned “Round Mountain” and the sin-haunted standouts “Open Flame” and “Devil’s Hand”). Matt Hillyer lends his hard-country stoicism and Micky Braun lends his brisk country-rock touch to “I’ve Got One Waiting” and “The Road to You,” respectively. Still, Patton seems to dig the deepest (or at least the most melancholy) when flying alone, so to speak: the two closing numbers, in memory of the late songwriter and Cheatham Street Warehouse proprietor Kent Finlay (“Red Bandana Blue”) and Patton’s own late sister (“Fourteen Years”) are soley, and could probably only, be written by Patton. “I’ll keep holding on to you in every way I know how,” she sings resolutely in the latter, and Patton’s best songs really do feel like they could outlive us all. — MIKE ETHAN MESSICK

Previous post Mike and the Moonpies: "Steak Night at the Prairie Rose"