Mike Ethan Messick: “The Only Easy Day Was Yesterday” 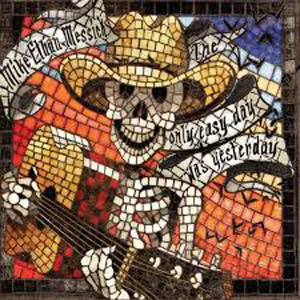 It’s really easy to like this sophomore outing from Austin-based singer-songwriter Mike Ethan Messick; the hard part’s nailing down exactly what it is about the album, and Messick in general, that’s so appealing. Make no mistake: there’s a whole lotta good on The Only Easy Day was Yesterday, and it’s a goodness that has as much to do with Messick himself as it does with the can’t-miss supporting cast, which in addition to producer/bassist Adam Odor includes such ringers as Lloyd Maines, the Trishas and Cody Braun and David Abeyta of Reckless Kelly. There’s a satisfying meat-and-potatoes heft to Messick’s songs, which can pack a Bottle Rockets-worthy wallop (“Leave the Rest Behind,” “Nickel”) or coast at a confident cruise control down the same heart-worn highways haunted by the Drive-By Truckers at their bittersweet best (“Oldsmobile”). He can also throw down a bluesy honky-tonker with conviction (“Head Start”) and knock out melodic Americana ballads (“Miss You Like Crazy”) that sound as radio ready as anything this side of the Randy Rogers Band. But Messick’s no golden throat of a singer, and his songwriting voice, though certainly a cut above most of the stuff selling out Billy Bob’s or Texas country festivals of late, doesn’t quite distinguish itself here on the level of, say, a Ryan Bingham or Adam Carroll. That means that what ultimately seals this deal is simply the gut-instinct feeling that Messick is just plain worth pulling for. True to its hardscrabble title, The Only Easy Day Was Yesterday may not herald the arrival of the next big thing in Texas music, but it walks the walk with true grit and a blue-collar conviction that’s 100-percent bullshit free. — RICHARD SKANSE