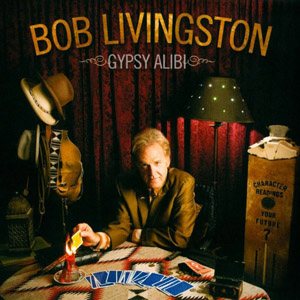 As a charter member of the Lost Gozno Band, Bob Livingston’s logged as many miles on the cosmic-cowboy highway as any veteran of the wild-and-wooly early ’70s Austin country scene still standing (or, for that matter, sitting center stage at some fancy-pants theater with a wine bar). He’s also got his own fair share of that old-time Lubbock rock ’n’ roll, a la Buddy Holly and the hard-charging Joe Ely Band. But no matter how many times he’s played (be it as sideman or frontman) the outlaw honky-tonker or rocker throughout his long career, Livingston is, at heart, an unabashedly mild-mannered folkie. Or at least, that’s the side of him that comes into clearest focus — like the floating answer in a Magic 8 Ball — on his latest solo album. Co-produced by Livingston and Lloyd Maines (with most all of the usual suspect Austin session pros associated with both men present and accounted for), Gypsy Alibi covers as much stylistic ground as both its title and Bob’s freewheeling background would suggest. The title track, buried deep on the back end, hitches a stream of carney-themed snapshots (“major domo in the spotlight/all the clowns come out at midnight”) to a delightfully surreal, piano-driven melody suggesting Randy Newman at the helm of The Band. Elsewhere, you’ll find a grade-A country weeper (“Till Death Do Us Part”), spry, Springsteeny pop (“Dance Like It’s a Holiday”), a zippy rockabilly number hot-rodded by guest guitarist Bill Kirchen (“Middle Ages Rockabilly Blues”), and even a shot of atmospheric sci-fi (“Android’s Lament”). For the most part, Livingston pulls it all off with a breezy confidence. That said, though, having a country & western swing song not only about country & western swing but called “Country & Western Swing” is a bit much — especially when the yodeling “Oklahoma Girl,” a delightful co-write with Okies John Hadley and Susan Herndon, covers similary ground without forcing the matter. But when Livingston eases up on the genre flexing and settles into his more relaxed, Kerrville Folk Festival (or listening room) singer-songwriter voice, he’s a natural charmer. The easy-loping “Ruby’s Shoes” opens the album on a note of sweetly disarming optimism (“If you’re the question/I could be the answer”), and the equally winsome “I Can’t Sleep Tonight” floats along with a pleasantly melodic vulnerability before being spirited away to India on a dreamy psychedelic coda. “Ghost of Vicksburg,” an exquisitely rendered Civil War vignette, wears its crisis-of-faith gravitas on grey sleeve with a dignity befitting a serious songwriter’s career best — which it very well may be. But the chaser, “Blind Love,” is no slouch, either. Nobody would ever mistake that ebullient little hippie ditty for any kind of swaggering outlaw country anthem; but it’s got a hook that could snare a goofy-assed grin out of the sourest redneck mother alive. — RICHARD SKANSE

Next post Mike Ethan Messick: "The Only Easy Day Was Yesterday"