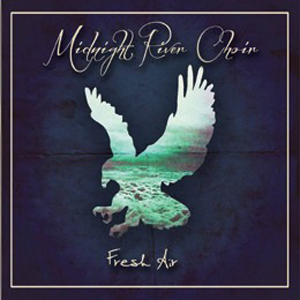 On their third album, Midnight River Choir demonstrates just how much that “Choir” in the band’s name factors into its overall sound — and appeal. Overall, Fresh Air, the New Braunfels, Texas-based group’s follow-up to 2011’s Welcome to Delirium, is a collection of bluesy songs full of energetic, roots-rocking flair not too far removed from the kind of stuff played by many of their regional peers. The up-tempo boogie of “Moonpies” and “I Need a Miracle” enjoyably recalls the jammier elements of the Band of Heathens, while the more deliberately paced, smoky electric guitar haze of “Tombstone Lullaby” and “Ashes to Ecstasy” reminds one of both Seth James’ solo efforts and his contributions to the Departed. But it’s the group harmonies throughout that set these guys apart. As the lead singer, Eric Middleton’s voice isn’t a particularly bold one that resonates deep down, but when bandmates Justin Nelson, Mitchell Pyeatt, and Bob Driver join in with harmonic assistance for the chorus on most of these songs, the choral effect is powerfully soulful. Chalk it up to strength in numbers. — KELLY DEARMORE