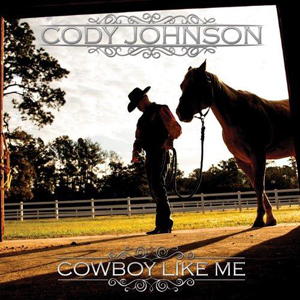 In that seemingly forgotten golden age of 1990s mainstream country music, one would be hard pressed to go wrong by picking up a copy of the latest CD (or tape, perhaps?) from young guns such as Rick Trevino or Clay Walker and proven stars as bright as George Strait or Alan Jackson. Those days may seem a long time gone in this modern era of bro country, but Huntsville’s Cody Johnson is a hat-wearing, cow-roping throwback, with a new record that sounds ripped from the airwaves that once couldn’t play enough Mark Chestnutt, George Ducas, or Tracy Byrd. Johnson doesn’t attempt to break new ground on Cowboy Like Me, as there’s little need to as long as you’re handling the basics as well as he does. Much of the album, especially cuts such as “Me and My Kind” and “Dance Her Home,” resides in the fiddle and guitar-wrangling, boot-scooting category, only slowing down for waltz-begging numbers such as “Baby’s Blue” and the Jeffrey Steele co-write, “Holes.” In the blue-collar anthem, “Proud,” Johnson sings about his woman who “can rock a dress” and likes Bud Light, makes cornbread, and knows how to give him some sweet lovin’. In the stirrups of a sleek pretty-boy, such simplistic sentiments flop, but here, Johnson makes us jealous by just being himself. — KELLY DEARMORE

Previous post Robert Ellis: "The Lights From the Chemical Plant"