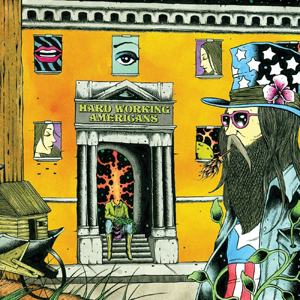 When Todd Snider’s friend and co-manager, Great American Taxi keyboardist Chad Staehly, suggested Snider try hanging out with some musicians his own age for a change, the singer-songwriter rang up two favorites: Widespread Panic bassist Dave Schools and Chris Robinson Brotherhood guitarist Neal Casal. With Staehly and drummer Duane Trucks, they entered a studio and started playing. By the second song, they were a band. And what a unit they are. On a dozen Snider-selected covers, they explore forbidden swamps (“Blackland Farmer”); grungy blues (“Run A Mile”); Led Zep turf (“Another Train”); and even bawdy, near-Vaudevillian bump-and-grind music (“Mr. President [Have Pity on the Working Man]”). “The Mountain Song” has a sweet rhythm and soul, and Casals’ Jerry Garcia-like guitar flights are sonic joy. They kick the holy jammin’ hell out of “Stomp and Holler,” then build to a gospel-influenced crescendo in “Straight to Hell.” “Down to the Well,” a mid-tempo, but downbeat country-pop tune, conveys just how well these talents mesh, with each instrument, including Snider’s craggy vocals, emphasized at exactly the right moment. When he sings, “She used to know every inch of my body, every mile of my soul,” everything but the bass drops out, giving each word the weight of the world. The entire album, in fact, is meant to weigh a bit on the souls of those who listen, to create more empathy for the downtrodden — those hard-working Americans feeling the heaviest footprints from the 1-percenters walking all over us. But try as they might, they won’t crush us completely — not as long as we have music like this to lift us up. — LYNNE MARGOLIS