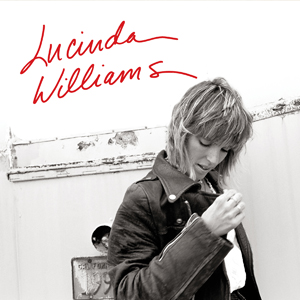 Scour the extensive liners accompanying this deluxe, 25th-anniversary reissue of Lucinda Williams’ self-titled 1988 third album, including a pair of fine making-of essays by critic Chris Morris and Rough Trade A&R rep Robin Hurley as well as Williams’ own song notes, and you won’t find a single mention about how or why the record ended up falling out of print for 10 years (having last been issued on CD by Koch in 1998, and until now never available as a legal download). That’s probably just as well, because no inside-baseball account of legal red-tape issues, misplaced master recordings, or even the notion of just waiting for the right time (like the aforementioned anniversary) would suffice as a satisfactory excuse for the album’s decade in limbo. All that matters is that the finest album of William’s career is finally back in all its perfect raw-nerved and nakedly honest glory. And it’s about damn time.

To clarify on that “finest album” bit: In the quarter century since this record’s original release on the U.K.-based independent label Rough Trade, Williams has made more successful albums and even a few arguably its artistic equal (by popular consensus, 1998’s Car Wheels on a Gravel Road, and — to my ears, at least — 2009’s West and 2011’s Blessed). But as Williams herself recounts in Morris’ essay, her third album became “the barometer by which I measure everything else, from here on out.” That longtime concert-staples/fan-favorites like “Passionate Kisses,” “Changed the Locks,” and “Crescent City” still hold up as high-water marks in her distinguished canon goes without saying — and not just because of the broader exposure given each via notable covers by Mary Chapin Carpenter, Tom Petty, and Emmylou Harris. But every other track here stands out just much: from the palpable rush of libidinous anticipation of “I Just Wanted to See You So Bad” to the shattering evocation of heartbreak in “Abandoned” to the exquisitely rendered, still-life reflection of “what if” soul searching painted in “Side of the Road.” Instructing her lover to stay in the car, Williams unspools a flood of bittersweet truth in the space of a second thought: “Let me go and stand awhile/I want to know you’re there, but I wanna be alone/If only for a minute or two/I wanna see what it feels like to be without you.” Trying to measure “everything else” one writes against lines like that would scare most artists straight into selling real estate.

Newly remastered from the original master tapes, Lucinda Williams has never sounded better (especially when played on 180-gram vinyl, if you swing that way). The production — by Williams and former cohort Gurf Morlix — might still sound a little dry and even thin compared to the more densely atmospheric textures of Williams’ later albums (particularly those from 2002’s Essence and on), but the unfussy arrangements and sympatico band (anchored by Morlix on guitars, Donald Lindley on drums, and Dr. John Ciambotti on bass) serve to keep the spotlight on the impeccable songs. Williams’ voice here is a cleaner instrument, too — still raspy enough around the edges to make every line feel lived in, but not quite the fully weathered, to-hell-and-back-again ragged wonder that it is today. There’s no shortage of seasoned grit and gristle in her lyrics, though, and plenty more on display throughout the live tracks included on this edition’s bonus disc, including 14 from a previously unreleased 1989 concert in the Netherlands. Running through most of the songs from the then-still-new Rough Trade album along with a few earlier numbers (including rip-snortin’ swings through the traditional “Factory Blues” and the title track of Williams’ second album, 1980’s Happy Woman Blues), it’s the best now-official live release of Williams’ career. But make no mistake: it’s the return of the too-long-MIA studio album itself that makes this release essential on any discerning music fan’s shelf. Simply put, Lucinda Williams is as good as Americana gets. — RICHARD SKANSE