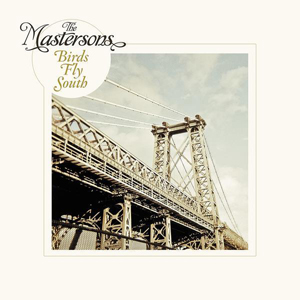 The Mastersons — the band — are Eleanor Whitmore and Chris Masterson, a Brooklyn-based, Texas born-and-raised married couple of kids with a musical pedigree and mad skills to spare. When you’ve earned Steve Earle’s imprimatur as a duchess and duke, respectively, you’ve certainly got cred. She’s played fiddle for Kelly Willis and Regina Spektor. He’s toured with Son Volt. Respect must be paid.

This is Americana for detached earbud-wearing strap-hangers and hipster city folk, in the Civl Wars vein of swapped lead vocals and tender and loving harmonies. It leans a tad more Isobel Campbell and Mark Lanegan than Gram Parsons and Emmylou, and that’s kind of a cool thing, because, really, it is the 21st century, after all. Highlight tracks include “Crash Test,” with Eleanor taking lead vocals on a stylish song that hinges on a catchy if uncharacteristic melody and showcases their ability to deliver a unique sing-a-long style of pop even for those of us whose voices don’t blend nearly as well with our own mates. “Fool” also stands out on the strength of Eleanor’s vocals and some gritty guitar work from hubby. There is a bit of a power differential at play here, with her songs working a bit better than his; it’s a matter of Eleanor’s leads being a tad more distinctive and sincere, with his more tame and benign.

Other tracks could use a bit more depth — a result, perhaps, of too many songs about, gulp, relationships. “One Word More” sounds like the self-absorbed whining of young lovers learning that, gee, there are things in the road of romance called bumps. Their “The Other Shoe” wears a bit thin and leans more on cliché than insight. This is the lyrical equivalent of those syrupy young puppy lovers you see clinging to each other in oblivious — and obnoxious — public displays of affection even on those 103 degree Texas days. The title track is a beautifully arranged and produced song — again featuring Eleanor’s lead vocals — but suffers somewhat from the shopworn sentiment of wanting to get out of the city for a spell and the desire to “go somewhere soft where the pace is slow.”

The Mastersons’ debut effort is like that nice young couple that just moved in down the street. They sure appear to be an attractive and loving and talented pair, but they’ll probably be a lot more interesting to listen to when they’ve lived a little. — D.C. BLOOM

Previous post Hobart Brothers & Lil' Sis Hobart: "At Least We Have Each Other"