Hobart Brothers & Lil’ Sis Hobart: “At Least We Have Each Other” 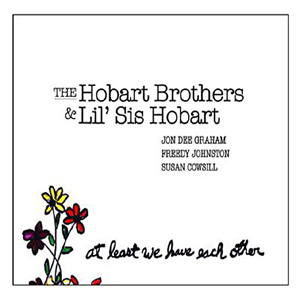 At Least We Have Each Other’s 10 songs (augmented by nine spare bonus demo versions) demonstrate the Hobarts’ knack for illuminating the inner lives of the characters who populate their songs, and that sense of empathy and insight is consistent through such bittersweetly haunting, group-written tunes as the Graham-sung “Why I Don’t Hunt,” Johnston’s “Sweet Senorita” and the Cowsill-led “I Never Knew There Would Be You.” Although the three principals alternate leads, whenever they harmonize, Graham’s sandpapery bark, Johnston’s keening tenor and Cowsill’s soulful ache mesh with organic ease.

The ease with which the Hobarts — who are joined here by Graham’s bassist Andrew DuPlantis and Cowsill’s husband and ex-Continental Drifters bandmate Russ Broussard on drums—merge their individual personae into such a satisfying whole underlines how comfortable these three distinctive auteurs are in their own musical skins. At Least We Have Each Other is an ideal partnership, showcasing its participants’ individual strengths as well as their potent collective chemistry. — SCOTT SCHINDER