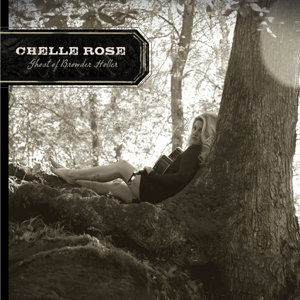 Now this woman can sing. And growl. And purr. And rock. Basically, Chelle Rose does everything a real live country ingénue is supposed to do. And it’s all on display on Ghost of Browder Holler. But if you’ve grown accustomed to today’s country served up by artists who hail from the other side of Mssrs. Mason and Dixon’s line and warble in affected Southern accents, Rose and that voice that drips sweet Tupelo honey on every syllable sung will be a much-needed shock to your system.

Producer Ray Wylie Hubbard clearly had his hands full with this one and must have relished the chance to bring together a consummate supporting cast that would get maximum mileage out of Rose and the brash attitude she brings to the proceedings. There are many of the players from RWH’s latest effort — Ian McLagen, George Reif, Rick Richards, Billy Cassis and Brad Rice — and they’ve baked up a dozen tracks that hit every mark and make it next to impossible to say one cut is better than the other. Here’s how cool, sexy and intoxicating the title track is: It didn’t even need her well-known producer’s signature gruff vocals. No offense, Ray, but, well, you’re kind of the weakest link on that one there. She’s just that dang good. As well as the ballads work, such as the touching “If I Could” and “Wild Violets Pretty,” which features Elizabeth Cook on backing vocals, it’s when Rose is allowed to rock out that things get real interesting. On Julie Miller’s “I Need You,” with Richards’ drumming dominating the Stones-fused mix, Rose shows she can snarl and rooster strut like the best of ’em. Her own “Alimony” proves she can rock, roll and write, too — “I married a man cuz he was kin to Dottie West, found out it ain’t exactly true, it was by marriage I guess.” The rollicking “Rattlesnake in the Road” would be at home on anyone’s snake farm. She’s also capable of channeling up some Tony Joe White with “Russ Morgan,” the story of a preacher man who knew the importance of keepin’ the mountain people on his side. There’s not only a ghost in the holler, there’s a real and vibrant spirit in all that Rose has gotten right with this outing. — D.C. BLOOM