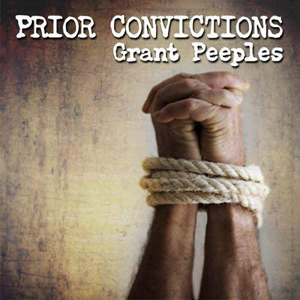 Grant Peeples is clearly a man of deeply held convictions … and cojones. Both — or should that be “all three?” — are front and center on Prior Convictions, his third release and second produced by Gurf Morlix. Peeples sings his version of the truth with the deepest of conviction and that’s bound to rub some the wrong way. “So be it” seems to be the attitude of this late bloomer, who spent his first five-odd decades taking it all in and is now, fortunately for us, spitting it all out, with, well, honesty and conviction. You may not like where he’s coming from on the political spectrum, but candor and courage used to be something that garnered bi-partisan respect — in both politics and the music industry. It still should. Yes, it takes a pretty courageous fella to record a song entitled, ah, how to put this, “[N-word] Lover,” and employ it as an unapologetic confessional for his long standing left-leaning views — and compassion for fellow human beings — that seem to be increasingly out of sync in large red swatches of this great red, white and blue land of ours.

Recorded in Austin, with Joel Guzman, Rick Richards and the aforementioned Morlix throwing in more savory licks than you can shake a stick at, Peeples populates Prior Convictions with both sweeping indictments and hope — hope that there are epiphanies to be found along that “Road to Damascus” and that a modern day Diogenes may still yet find “The Last Honest Man.” In the former song, Peeples reveals that he’s “on a mission to save the Faith” and in the latter — a simple and elegantly fingerpicked refrain — notes that “it’s hard to change the world when you play it safe and let your prior convictions get in the way.” Ruthie Foster joins Peeples on the powerful cover of “Things Have Changed,” where he cribs Dylan’s conviction that “any minute now all hell is gonna break loose.” Despite what Peeples sings, it’s clear this is a man who still cares deeply, no matter how much things have changed. And he’s sure not about to play it safe. — D.C. BLOOM