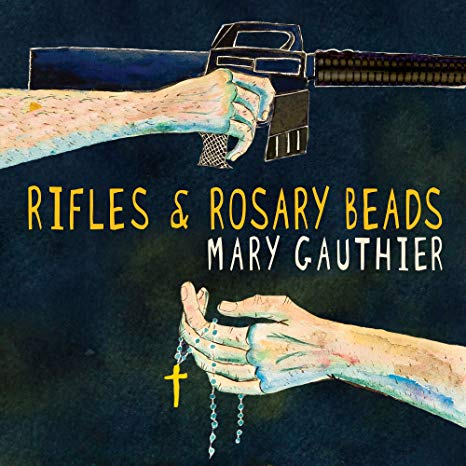 MARY GAUTHIER
Rifles & Rosary Beads
In the Black
In a political era where too many people feel compelled to a) pick a side and b) see how many people they can piss off on the internet before midnight, it’s heartening to see an unexpected alliance not only form, but also put its efforts towards talking about high-stakes, literally life-and-death matters with maturity. With a credibility and perspective that many of us haven’t earned, real-life American military veterans with no pre-existing music careers lent their co-writing perspective to Mary Gauthier. And if they didn’t know going into it that her clear-eyed, unsentimental approach to songwriting might fit their hard-earned memories of glory, grit and trauma like a glove, they (and we) sure know now. There’s a risk inherent in something like this coming off as either a nice gesture that never fully pans out or, worse, some unseemly emotional tourism by a songwriter in search of an unconventional muse. Gauthier and her new collaborators never allow it to veer into either ditch, delivering round after round of complicated tales of faith, duty, fear and courage. If Rifles & Rosary Beads doesn’t move you, you’re not listening. — MIKE ETHAN MESSICK