Lucinda Williams: “The Ghosts of Highway 20” 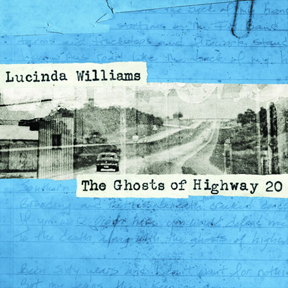 If Lucinda Williams’ 2014 album Down Where the Spirit Meets the Bone found the singer dipping her toes into the deepest waters of the ocean, on The Ghosts of Highway 20 she plunges in head first. This is adult music, made by an adult singer and songwriter whose storytelling over the past 15 years has become more and more like poetry, and whose smoky vocals have evolved from an assertive drawl into the nuanced phrasing of a jazz chanteuse. Her roadmap on Ghosts is a ribbon of southern highway that runs from South Carolina to West Texas, bypassing towns and cities Williams has sung about or alluded to many times before: Macon, Atlanta, Jackson, Vicksburg, Shreveport, Monroe. Along the way, the 62-year-old singer explores life and death in cinematic songs that stretch out like the land itself, with instrumental improvisations that twist and turn like the road that cuts through it.

“I know this road like the back of my hand,” Williams sings over the fuzzy guitars of the title track, and she’s not exaggerating. She attended grade school in Macon, Ga.; her brother was born in Vicksburg, Miss., her sister in Jackson; and her mother was born and buried in Monroe, La..

In the 14 songs that make up The Ghosts of Highway 20, Williams colors in the details of the lives of the people and places along the way. Three of them are homages to her parents, both of whom have died in the past decade; others deal in themes of sin and redemption. Among the standouts is the acoustic-based “Louisiana Story,” a song that’s by turns wistful and terrifying as Williams invokes fading memories of a seemingly tranquil Southern childhood. “In the Deep South when I was growing up / Looking back on the sweetness, looking back on the rough / The sun going down, the crickets at night.” But those memories turn dark as a dungeon as she describes a child’s violent father who’s “blinded by fear and the wrath of the Lord.” It’s unclear whether the child is a neighbor or a relative, and it doesn’t really matter.

The extraordinary band on this session — guitarists Bill Frisell and Greg Leisz, drummer Butch Norton, and bassist David Sutton — takes flight on several extended jams, with Williams improvising vocally along with them. For example, in the nearly 13-minute-long “Faith & Grace,” based on Mississippi Fred McDowell’s “Just a Little More Faith,” she slurs and testifies like a southern preacher over a mid-tempo din of swampy, psychedelicized gospel blues. “That’s all I need, that’s all I need, that’s all I need,” she repeats with a desperation never before heard from Williams. “I need a little more faith and grace. We all need a little more faith and grace.” Another track, “Dust” — based on a poem by her father, the one-time poet laureate Miller Williams, with lines like “there’s a sadness so deep the sun seems black” and “even your thoughts are dust” — culminates in an instrumental workout that’s part Allman Brothers and part Grateful Dead as Frisell and Leisz’s guitars coil around the rhythm section like earthworms around a corpse.

Elsewhere, Williams explores vocal techniques you’d expect from a Tom Waits or Rickie Lee Jones. In “I Know All About It,” a song Williams wrote in 1980 but never recorded, she talk-sings in the way Jones did in her earliest pieces about beatniks and L.A. lounge lizards. Williams also transforms a pair of songs by other writers, putting music to an unfinished Woody Guthrie lyric, “House of Earth,” about a house of ill repute, and relocating Bruce Springsteen’s “The Factory” from the Midwest to the South.

Perhaps the starkest ghosts along this highway are Williams’ parents. She wrote two of the songs – “Death Came” and the bluesy “Doors of Heaven” – around the time of her mother’s death in 2004. In the former, she sings with compassion (“Death came and took you away from this … gave you his kiss”), and in the latter she documents her mother making peace with the Grim Reaper (“Open up the doors of heaven, let me in / I think I’m finally tired of living”). In “If My Love Could Kill,” which she wrote after the death of her father last year of Alzheimer’s, she characterizes the disease as a “murderer of poems, murderer of songs.”

Not everything is so dark along this highway. Over a spare acoustic guitar that opens up into the anthemic sprawl of a full band in “Can’t Close the Door on Love,” Williams finds grounding in the most human of emotions, singing drolly of the importance of loyalty and perseverance in the relationships that keep us going through the fog of life. “Trust me,” she tells her lover, “you can’t close the door on our love just because you make somebody cry. It ain’t no thing, it’s just a little teardrop.” — MARK KEMP 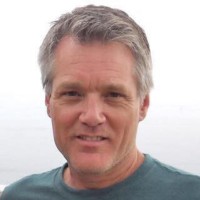 About the Author Mark Kemp

Mark Kemp is the senior editor of "Acoustic Guitar" magazine and author of "Dixie Lullaby: A Story of Music, Race, and New Beginnings in a New South." (http://www.ugapress.org/index.php/books/dixie_lullaby/1/0)
Twitter Facebook