Lucinda Williams, “Down Where the Spirit Meets the Bone” 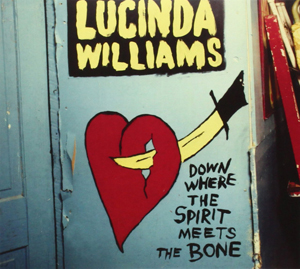 At this point in her career, it’s almost hard to believe that Lucinda Williams was ever pegged as a fussy perfectionist. She got saddled with that rep over the reportedly protracted labor pains and studio drama that eventually produced her 1998 breakthrough, Car Wheels on a Gravel Road; but ever since that album’s release to resounding critical and even commercial (for a non-mainstream record, anyway) success, she’s produced a steady stream of new work like an unburdened artist in full, confident stride. What’s more, she’s admirably (if albeit frustratingly to some of her fans) avoided the safe route of trying to deliver a Car Wheels II, resulting in a no-two-alike succession of risk-taking records that have hit the mark far more often (2001’s Essence, 2007’s West, 2011’s Blessed, and about half of 2003’s World Without Tears) than not (the rest of World Without Tears, and pretty much all of 2008’s decent but forgettable Little Honey).

At first pass, her 11th studio album, Down Where the Spirit Meets the Bone, seems to split that hit/miss ratio right down the middle, which seems about right for a double album spanning 20 songs stretched out over an hour and 43 minutes. Even for a hardcore fan, that’s a lot of Lu to process all at once — and Williams doesn’t really go out of her way to offer much of a helping hand, a la the irresistible, kick-ass hook of “Buttercup,” which opened Blessed with a bang. Rest assured, though, there’s swagger to spare here — but it’s grooves, not hooks, that do the heavy lifting and grabbing. Paced and sequenced like a marathon set list, it’s a record that sneaks up on you; you may well be halfway through the six-minute “Foolishness” (on disc one) before you smell the smoke coming from the speakers. Then you’ll crank it up and play it again, ears as keenly attuned to the rolling boil intensity of guitarists Greg Leisz and Stuart Mathis (Wallflowers) as to the hypnotic spell of Williams’ chant-like admonishment of trash-talking liars and fear-mongers, her seething delivery closer in spirit to prime Patti Smith than anything remotely “Americana.”

Lyrically, Williams is as sharp and poignant as ever throughout, tapping deep into rich veins of frustration, heartbreak, and emotional resolve and tuning every line to precision. The opening “Compassion,” adapted from a poem by her father, Miller Williams, sets the tone, its plea for empathy (“You do not know what wars are going on/down there where the spirit meets the bone”) alternately answered and wrestled with in songs as disparate as the feel-good “Stowaway in Your Heart” and the tortured anguish of “Burning Bridges” (“You’re the saddest story that’s ever been told/and I stand back and watch as the tragedy unfolds.”) And though a lot of her melodies this time around seem a little under developed, that rough-around-the-edges quality feels of a piece with the bottled lightning charge of the performances. Williams has always had great players on her records, but she’s never come out of the studio with an album that crackles with the energy of a live band quite like this one. The credits reveal a fair amount of track-by-track musical chairs, but co-producer Leisz and the core rhythm section of Pete Thomas and Davey Faragaher (both on loan from Elvis Costello) earn MVP nods along with Tony Joe White, whose thick, swampy guitar cloaks “West Memphis” and “Something Wicked This Way Comes” in menace, and jazz guitarist Bill Frisell, whose moody, liquid tones underscore the beautiful melancholy of “It’s Gonna Rain” and infuse the long, slow closing cover of J.J. Cale’s “Magnolia” with an ambient glow. Williams’ singing, meanwhile, has rarely sounded better, be it dialed down to quiet, vulnerable lament or pushed to angry, feral growl. And if it’s the carnal side of Lu you’re looking for, well … suffice it to say that the hot-and-bothered Williams that sang “Right On Time” back on Car Wheels would blush like a schoolgirl listening to the way this woman summons the devil on “Something Wicked This Way Comes.” That song’s not a warning: It’s a promise. — RICHARD SKANSE