The Better Halves: “Tete a Tete” 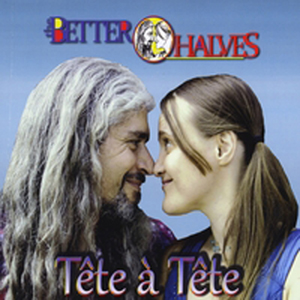 Add the Better Halves to that long list of musical couples that make charming music together. On Tete a Tete the Better Halves — that’s the Austin-based husband and wife duo of Jimmy Joe and Chrissie Natoli — give us quirky and precious songs that speak to the odd nature of that truest of love: the often inexplicable, yet not uncommon, attraction of the somewhat opposite. On “Different as Can Be,” they croon the confession that “the things we have in common are very few, cause you like me, but, baby, I like you,” and the back-and-forth gentle teasing banter includes such quips as, “you make sense for a girl with a cute little nose, you stand up for a guy with size 11 toes.” Their “Wedding Vows” playfully note that “you’re allergic to cow dairy, and you don’t eat gluten, so if we order a pizza without cheese or bread, we’ll end up with just a bowl of sauce instead.” Joe flashes his Berklee-honed fretboard facility on an amped-up, high-wire “Flight of the Bumblebee” and the Los Indios Tabajaras composition “Blue Angel.” But it’s the sprightly wordplay and reverent repartee that make Tete a Tete a smile-inducing recommended listen — even if you aren’t a pair of infatuated lovebirds. Co-produced by the couple and Tommy Byrd, the album features vocal contributions from Sara Hickman and Ken Gaines and players such as Warren Hood, Chip Dolan and Mollie Fischer. — GLEASON BOOTH

Next post Dana Falconberry: "Though I Didn't Call, It Came"

Previous post Lucinda Williams, "Down Where the Spirit Meets the Bone"