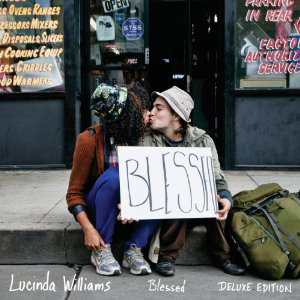 Smack in the middle of Lucinda Williams’ last album, 2008’s Little Honey, Elvis Costello popped up for a duet with Lu on a song called “Jailhouse Tears.” Paste magazine declared it one of the best country/rock duets of all time, apparently tactfully omitting the qualifier, “… sung by two drunken, randy alley cats rutting in the middle of a train yard.” Different strokes for different folks and all, but it was pretty much the low point on an atypically more miss-than-hit album that also found Williams singing about having her lover’s “honey all over my tummy” and covering an AC/DC song that she later admitted she’d never heard before it was suggested to her in the studio. Regardless, that’s all water under the bridge, because Costello shows up again on Williams’ new Blessed, this time not to sing but rather to throw down one of the most ferociously thrilling guitar tracks that Lucinda’s ever gone head to head with on record. And both vocally and lyrically, Williams definitely rises to the occasion on “Seeing Black,” a seething wail of frustration in the wake of a suicide [reportedly, that of fellow songwriter, Vic Chesnutt.]

Incredibly, “Seeing Black” isn’t the high-water mark of Blessed; it’s the standard. To call this the best album of her distinguished career would be a disservice to such past triumphs as 1988’s Lucinda Williams, ’98’s Car Wheels on a Gravel Road and, from the past decade, both Essence and West; that said, though, she’s never been better. Opening with the explosive roar of “Buttercup” — a kiss-off anthem for the ages — and closing with the gorgeously romantic, sensual swoon of “Kiss Like Your Kiss,” Blessed plays to every one of Williams’ strengths as an artist. “Copenhagen,” the latest in her long line of achingly moving memorials to friends and loved ones passed on, is a sweet surrender to grief carried on waves of sympathetic pedal steel. “Soldiers Song,” a languid but hypnotically haunting study of battlefield trauma contrasted with vivid snapshots of domestic life back home, broadcasts its inevitable conclusion from miles away, but it’s still chilling: “Today I took a bullet through the heart/Baby’s gonna have to make a brand new start.”

With that song coming straight after the harrowing “Seeing Black,” and followed in turn a couple of tracks later by the cold, hard facts of “Ugly Truth” (“From the cradle to the grave/you will always be a slave/to the quiet darkness of your memories”), Blessed might sound, in theory, like a tough bitter pill to swallow. Far from it. The real truth here is that it’s a thing of resplendent beauty and hope, revealed in full in the inspirational title track (an anthem of such grace, heart and dignity, it may well be the crown jewel of Williams’ songwriting life), and even further reinforced via the stubborn defiance of “Born to Be Loved” and the climactic resolve of the densely atmospheric, slow burning “Awakening.” “In the awakening,” Williams sings as the song unleashes its tightly coiled tension, “I will not bow my head.” Hallelujah. — RICHARD SKANSE