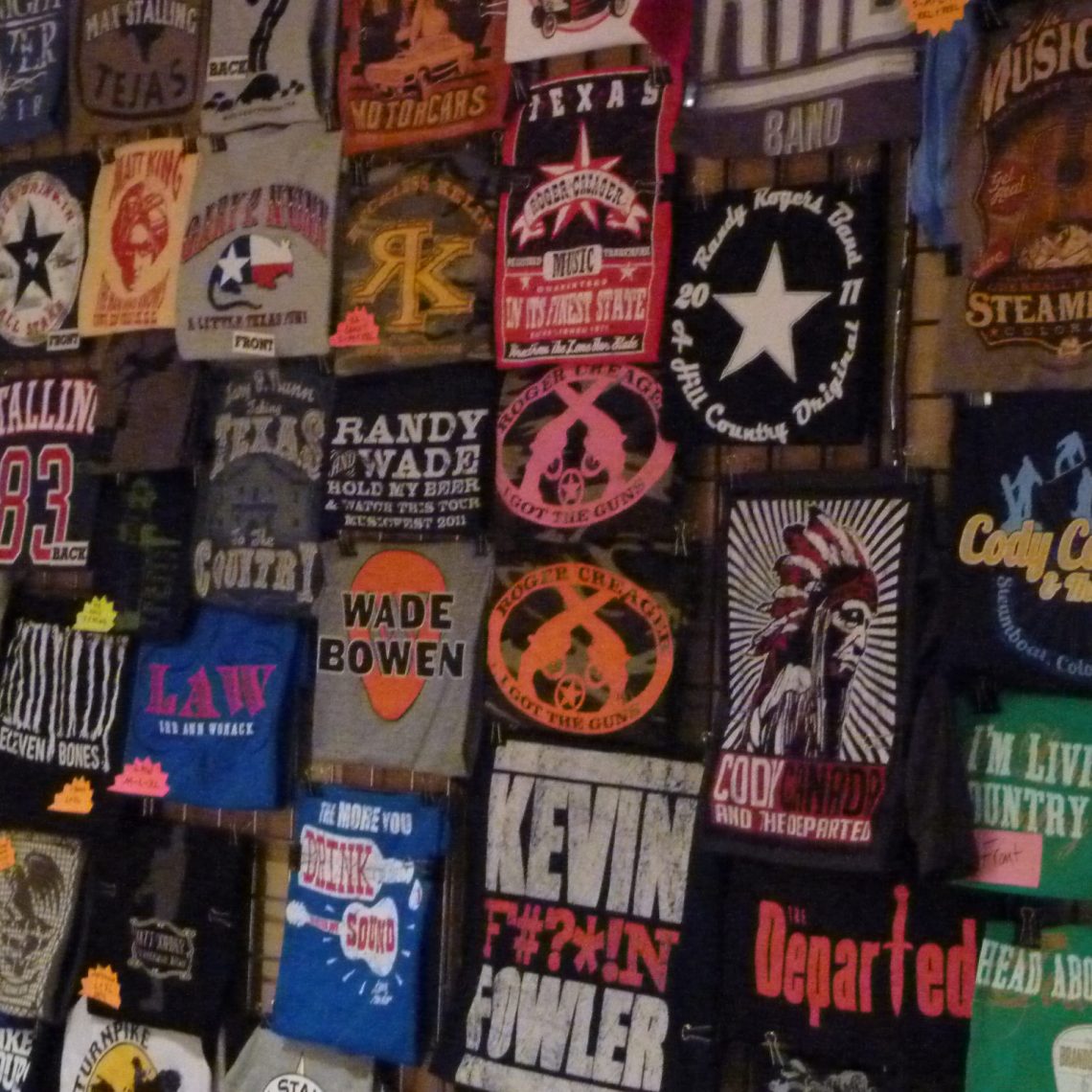 It appeared in my inbox in early December with the subject line that read: “Shiner Musicfest Sweepstakes Award!” I’m sure it was that tantalizing exclamation mark that gave me the pause long enough to actually check it out. Here’s what I found:

“I am thrilled to inform you that you have won a trip to the 2011 MusicFest in Steamboat Springs, Colo. The festival will take place from Jan. 5 through Jan. 10, 2011. Shiner will pay travel and accommodations for you and a guest as well as provide you two passes to Musicfest.” 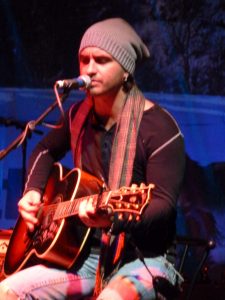 I immediately called the number listed, because — just between you and me — I had no recollection of ever even entering any MusicFest contest with Shiner. But then I vaguely remembered a page on their website that had asked Shiner lovers to share pictures of or audios about their favorite brand of beer. Several months earlier, I had uploaded a song I’d written called “Headturner From Texarkana” that has the line, “when she’s in San Antone, she don’t leave me alone, she’s always suckin’ on my … (wait for it) … Shiner brew.” But I wasn’t about to press my good luck at this point by asking if that’s, indeed, how I’d gotten into this little sweepstakes of theirs, and once the friendly director of marketing had confirmed that this was all legit — that I wouldn’t have to sit through any sales pitches for condos or timeshares — I started packing right then and there.

Of course, there was also the little matter of choosing who would be heading for the Rockies with me. (Oops, that’s not a Coors slogan, is it?)  My college-aged children and many youthful friends and co-workers made impassioned pleas, swearing they’d always wanted to go and this opportunity shouldn’t be wasted on, as one relative now written out of the will put it, “a wheezin’ geezer like you.” I showed them all, and picked an age-appropriate traveling companion, even though she’s not exactly suckin’ on my … (wait for it … I still am).

This would be my first MusicFest, and the 26th overall. But — as I’d been reminded — being a bit north of 50, I did have some concerns that I’d be old man out in that young frat boy/sno bunny crowd I envisioned. But I scanned the lineup schedule, saw the names of Texas music veterans like Joe Ely, Gary P. Nunn and Radney Foster amid the comparative red dirt young-un’s like Brandon Jenkins, Wade Bowen and Randy Rogers, and figured, ah, maybe a greybeard like me will have an okay time after all.

Besides, what makes MusicFest great are the things that appeal to people of all ages — all ages over the legal drinking age, that is. Or as a fellow gondola rider put it:  “This festival combines three things I love most in life: Texas, music and beer.”

In five days in Steamboat, I saw more pot-bellied guys wearing Stoney LaRue t-shirts and cowboy hats than I have in five years in Austin. While meeting and mingling with folks from all over attending MusicFest, many of whom have been making the annual pilgrimage to the festival since the first Bush Administration, the vast majority were Lone Star State ambassadors.

“It’s the Invasion of the Texans!” the waitress shouted as a dozen or more suburban cowboys sauntered into the restaurant bar. They were all carrying plastic cups of Shiner Light Blonde, the beer that was in heavy rotation throughout the festival. “This stuff is great,” one of them enthusiastically told me, “and it’s so freakin’ light you can drink it all day!” Seeing how it was only 9:30 in the morning, he seemed intent on proving just that.

All I planned to prove that morning was that an old guy who hadn’t donned ski boots in two decades and literally had had a stroke five months earlier could survive a day roaring downhill on a trail with the not-so-intimidating name of “Y Not.” Why, guess what? I did. But barely. My skiing technique was much more “pizza” than “French fry.” That’s shorthand for the position in which you angle your skis. The instructor of the kiddie class that went zooming by me would yell: “Okay, gang, let’s make French fries and go faster!”

In the afternoon, I ambled over to the open mic at the Dung Beetle Saloon. When it comes to open mics, I usually follow the edict of “Been there, dung that.” I mean, I’ve done a slew of ’em over the years and have heard more covers of “If I Needed You” than I needed to. Hell, I even host one in Austin,  every odd Tuesday of the month at a place called Whip In. [Ed: No plugs, Bloom!] But here at Steamboat I was feeling my oats, and I thought this was one area I may be able to keep up with, if not whiz right by, these young whippersnappers in their pearl snap shirts. So I borrowed a guitar from one of ’em and put my name on the list. 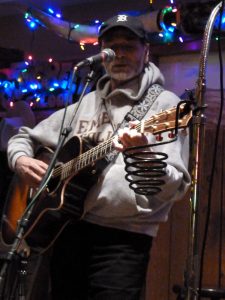 When in Rome … Steamboat: Writer D.C. Bloom taking his turn at a MusicFest open mic. (Courtesy of D.C. Bloom)

Many unsigned amateur songwriters do the open mic in hopes of getting discovered at MusicFest. I was doing it in hopes of not getting embarrassed. So I went with two trusty Texas-themed original songs I’ve only been performing since the second Bush administration: “The Ballad of Boerne and Alice” and “I Can’t Forget the Alamo.” They seemed to go over pretty well, if I must say so, and this was confirmed later when a quite lovely and somewhat tipsy blonde doused me with her slurred compliment, “Youzze werrre  freekaan AWWWW-suum!” 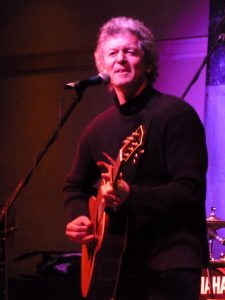 Then it was on to what was for me the highlight of MusicFest, the Artists’ Tribute to Rodney Crowell, where — by virtue of my sweepstakes-winner status — I had a front row seat to see and hear Roger Creager, Cody Canada, Tina Wilkins (who just killed, by the way), Charlie Robison, Reckless Kelly and a whole gaggle of others do songs from the vast Crowell catalogue before the best songwriter to call Johnny Cash his father-in-law took the stage himself. He was nursing a terrible sore throat, so honestly, I’ve heard Crowell sing better. He sounded great, though, when he read two moving excerpts from his new biography, Chinaberry Sidewalks.

But the best moment, for the older folks like me in the audience, was Crowell’s senior moment, when he repeatedly forgot the words to his own songs. This happens to everyone occasionally, of course, and he joked it off mid-song by saying, “I know these lyrics like I know my wife’s behind, but I can’t for the life of me remember them now.” Seasoned pro that he is, Crowell rallied and — picking himself up like a shitfaced drunk who’d just fallen off his snowboard — concluded with his classic song … er, ah, well, I seem to have forgotten which one, exactly, and my notes are too beer-stained to make it out now. But I can assure you it was freakin’ great!

And so was the entire trip, from jetting to and fro in first class, to hearing artists I’d never seen live before, like the Trishas, Brandon Rhyder and Corb Lund. I even enjoyed elbowing my way through crowds that were, as Peggy Hill would say, “packed butts to guts” to watch Cory Morrow under the stars at the top of the mountain. And I took delight in overhearing people in line behind me raving about Uncle Lucius, the band that clearly won over hundreds of new fans, and being able to say, “You’d never heard of ’em? Well, I see ’em all the time in Austin,” knowing that my early knowledge of the festival’s breakout act gave me a modicum of cred with the college kids.

And will I being going to next year’s MusicFest? You bet. Heck, this old dude will only be one year older … and so will all those frat boys.