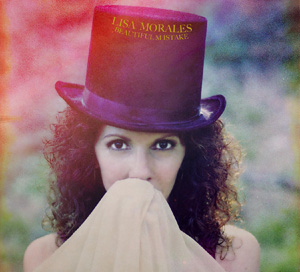 As poor consolations go, “it’s an honor just to be nominated” doesn’t hold a candle to “well, at least you got a song out of it.” Even in a bum economy, great art in exchange for a soul-gutting emotional apocalypse is a lousy bargain, and Lisa Morales would have to be a true masochist to want more of whatever hell she went through to come up with Beautiful Mistake. As far as making lemonade out of lemons goes, though, this solo debut from one half of San Antonio’s Sisters Morales is a triumph. According to the bio on her website, the songs were born out of Morales’ struggle to come to grips with the death of her mother; but even a casual listen suggests an evidentally devastating rift on a romantic relationship front as well. The double-whammy loss of both mother and lover is addressed point blank in “They’re Gone” (“They left me like a hurricane/hollowed out a part of me within”), though in the aftermath she finds some solace in knowing that at least her mother cared. It might be wrong to brand Beautiful Mistake an actual “divorce” or even “break-up” album, as Morales herself has opted not to, but suffice it to say that Dylan’s Blood on the Tracks plays like a honeymoon suite compared to the emotional bloodletting going on in songs like “You Forgot to Love Me” and “Don’t Want to Hear What You Have to Say.” All’s fair in this love war, though, as Morales actually directs many of her hardest blows on herself (“I have grown apart from you/Accused you of what I do,” she confesses on the stunning opener, “I Am the Weakest”); and elsewhere, songs like the bittersweet title track, the lusty “I Wanna Be in Love” and the defiantly optimistic “Looking for Something Beautiful” all hint at a slow healing already underway. Even at its most beautifully distraught, though, Beautiful Mistake positively soars as a showcase for Morales’ voice, which is as strong and frequently flat-out dazzling throughout the album as her melodies. Having never followed Sisters Morales’ career too closely, I can’t really comment on how much or how little of a departure this is for her; but even as an introduction, it’s a revelation — and as heart-rending and riveting a record that you’re likely to hear from any serious singer-songwriter this year. — RICHARD SKANSE