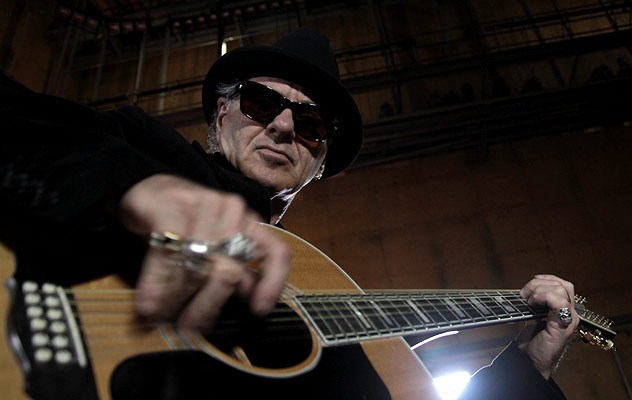 “I desperately needed a way to perform it live,” says Austin songwriter Bill Carter of his decision to redo his “Crossfire” as an acoustic blues number. “I can’t just scream it out like the cool way Stevie does.” (Photo courtesy Bill Carter)

From a 1983 jam session in a Manchaca, Texas warehouse to over three million airplays around the world, Bill Carter’s “Crossfire” has come full circle. And then some.

Co-written by Carter with his wife and fellow Austin Music Hall of Fame member Ruth Ellsworth, along with Double Trouble band members Tommy Shannon, Chris Layton, and Reese Wynans, the song was first recorded by Stevie Ray Vaughan in 1989 and released that same year on his fourth studio album, In Step. That record would end up being Vaughan’s the last released during his lifetime, but “Crossfire” gave the guitar legend his lone No. 1 hit when it topped Billboard’s Mainstream Rock Tracks chart. Nearly 30 years later, it remains a favorite not just in the SRV cannon, but arguably one of the most instantly recognizable blues-rock jams to ever come out of Texas this side of “La Grange.”

Not surprisingly, “Crossfire” is also the ace of diamonds in Bill Carter’s hefty deck of songwriting calling cards. With his wife and co-writer Ellsworth, the longtime stalwart has penned more than a handful of memorable tunes that have been recorded and performed by such other noteworthy artists as the Fabulous Thunderbirds, Waylon Jennings, John Mayall, and Ruth Brown — not to mention by Carter himself throughout his own woefully underappreciated discography of earthy and eclectic, genre-bending work. But it wasn’t until very recently that he finally got around to recording his own version of his most famous song, the one that has forever linked him to Stevie Ray Vaughan and left him anything but stranded. “Crossfire” is the opening track on Bill Carter, a set of stripped-down, acoustic-driven tracks showcasing his songwriting prowess. The album has been warmly received by fans and critics alike since its release back in October on Forty Below Records, and LoneStarMusicMagazine.com is honored to now help Carter premiere the video for “Crossfire,” filmed in the artist’s own home in Austin.

In a career that spans three decades and began at the tender age of 15, when he started playing in bands and drumming for paychecks in his native Kentucky (where the roots of his family tree stretch all the way back to the Carter Family), Carter has continually turned to that simple formula of combining three chords and the truth to create something of universal appeal that speaks to and of the human condition. Well, that, and an enviable gift for crafting head-nodding riffs and instantly memorable melodic musings … with the help of perhaps four or five additional major, minor, augmented or diminished chords. Because writing great songs isn’t always as easy as they make it sound. But in sharing the origin story of his most recognizable song — BMI honored Carter and Ellsworth for hitting that three million airplay mark, which only a handful of recordings have ever achieved — the ever-humble Carter really does make it sound like no big deal.

“I knew Stevie from having opened for him, and of course, I knew his brother from our stuff with the Thunderbirds,” he says. “The guys in Stevie’s band (Layton, Shannon, and Wynans) had been talking about us writing some songs for a while, so I told them the next time they came off the road, we’d go to that warehouse in Manchaca and see what we could come up with. So I’d beat out some chords and yell something phonetically into the mic while the guys jammed. Ruth and I had titles of songs we were thinking about and one was ‘Crossfire.’ Tommy had that bass lick and he started playing that. So I came up with the verses and bridge and all that stuff and then went home and wrote we wrote some more lyrics for it. We just put it together.”

When Stevie and the band heard what Bill and Ruth had banged out, they knew they had captured something wonderful. “Stevie said it reminded him of Jr. Walker’s ‘Shot Gun,'” Carter recalls — while casually adding that there may even be a few more shells from those warehouse sessions. “We probably have between 50 and 100 cassettes and all kinds of notes, somewhere.”

But even if none of those other tapes are ever unearthed, Carter can take pride in knowing that the world will always have “Crossfire,” one undeniable song that “really made a difference for Stevie’s career.” They money was nice, of course, but to Carter, it’s more about the impact that the song has had on listeners ever since. “I still hear it a lot, more than I’d think I would,” he marvels. “I might be in a shop somewhere on the East Coast or in a restaurant and I’ll hear it playing. That’s just the greatest feeling in the world. That’s what it’s all about — just knowing that something you did really struck a nerve with so many people. That is the ultimate payoff. Just the fact that you did something that really moved people in a good and positive way.”

Of course, when a song becomes that popular in the hands of an artist as singularly talented as Vaughan, the mere thought of re-doing it can be daunting, even for the guy who wrote it. Sure, countless bar bands and SRV disciples have mimicked the master’s firery take on the modern blues standard over the years, but Carter knew better than to go that route. Which is why he decided to essentially reinvent it by stripping “Crossfire” down to its essence. Or, as he puts it himself a bit more humbly, “I desperately needed a way to perform it live! I can’t just scream it out like the cool way Stevie does on the record.”

Instead, he put his resonator guitar in open tuning and came up with his own cool way of performing the song. Carter’s acoustic “Crossfire” retains the classic bass line of the SRV version but also sounds brand new, making for a long-overdue but worth-the-wait addition to his repertoire that he can finally comfortably share with his audiences. 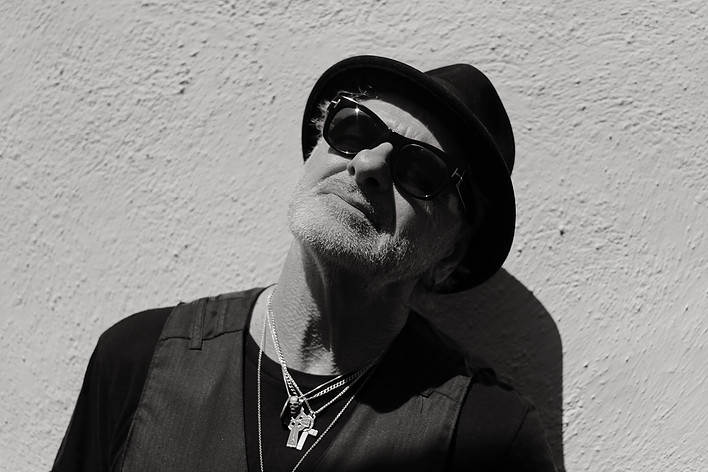 “Knowing that something you did really struck a nerve with so many people — that is the ultimate payoff,” says Carter of “Crossfire,” which Stevie Ray Vaughan first recorded nearly 30 years ago. “Just the fact that you did something that really moved people in a good and positive way.” (Photo courtesy of Bill Carter)

He also enlisted a young University of Texas filmmaker, Charlie Schwan, to direct a music video of the new “Crossfire.” Schwan, the son of a friend Carter has known since his teenage years, has made several shorts as well as a Bob Schneider video. For the “Crossfire” video, Schwan filmed Carter in the musician’s home bedroom sanctuary, a hideaway Carter describes as “a strange psychedelic world” permeated with darkness, colors and silver skull rings.

Oh, and about that vintage oh-so-cool 1929 Nashville Resonator with the world-weary patina that Carter employs in the video? It was a gift from Johnny Depp — yep, Jack Sparrow and Edward Scissorhands himself. Depp happens to be a longtime friend of Carter’s; back in the ’90s, they played in a band together (along with Butthole Surfers frontman Gibby Haynes) called P, and in 2013 Depp made a cameo of sorts playing backup in Carter’s band the Blame during an appearance on The Late Show with David Letterman. But the Depp-connection is only half of the resonator’s story.

“I don’t know where Johnny got that guitar, but when he gave it to me it was in this banged up, beat-up case,” says Carter. “When I opened it, inside I found an old airline luggage tag that simply read ‘The Ink Spots.’” It turns out Depp had unknowingly gifted him an artifact from the internationally beloved pop group of the 1930s and ’40s and a small piece of doo-wop and R&B history. “I’d sure love to know more about that guitar’s travels,” Carter muses. 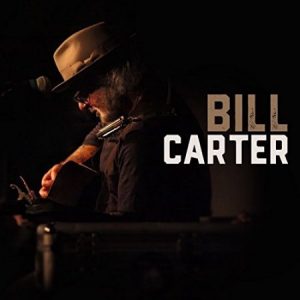 However cool those unknown tales may be, though, the guitar could not have found its way into more capable or worthy hands than its current owner’s. As befits its eponymous title, Carter plays every note (and wrote or co-wrote every song) on his latest album himself, and “Crossfire” is just the first of many highlights on the record. Others include the beautiful ballad “Anything Made of Paper,” inspired by the Memphis 3’s Damien Echols, and “Willie the Wimp,” about the demise of an infamous Chicago gangster. Of course, the late Stevie Ray memorably covered that song, too — right around the same time that his brother Jimmie Vaughan’s band the Fabulous Thunderbirds recorded another Carter tune, “Why Get Up?,” for their 1986 album, Tuff Enuff.

“A lot of folks have suggested it might be time for me to take a run at ‘Why Get Up?,’ which the T-Birds did years ago,” says Carter, who does just that on the new album. “Heaven knows there are days a lot of us are asking ourselves that question lately.”

But getting up and out the door is what Carter has been doing now for decades, and he doesn’t see himself stopping anytime soon. As long as there’s another show to do and more songs to write, he aims to keep on playing — especially after recently doing three shows with the 80-something John Mayall, not to mention being continually inspired by the indefatigable Willie Nelson. Anytime Carter actually does ask himself “Why get up?,” the example set by those two legends is more than enough to get him moving.

“I’ll think to myself, ‘Hey man … if they’re still going strong, I got no excuses!'”