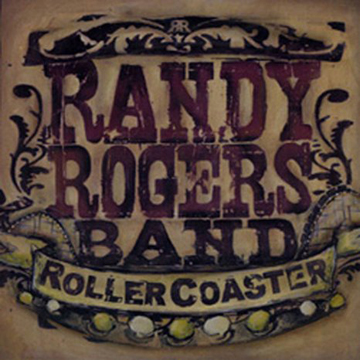 If you’re a band or artist striving to make your mark, every new album is a chance to boost your career. It’s an opportunity for press, an impetus to tour, and a financial boost if you’re lucky. Fans who were already on board will see it as a gift (even while shelling out a few bucks for it) and it’s a new shot at winning over the uninitiated. The Randy Rogers Band did all of the above and then some back in 2004 with Rollercoaster: not only did it give their young career a tremendous shot in the arm, it was one of those rare records that boosted an entire genre.

Rollercoaster built mightily upon the foundation of fan interest that had been piqued by the RRB’s previous efforts Like It Used to Be. It was bigger in sound and scope, benefitting from a couple years’ worth of road-honed chops from an increasingly in-demand young band. To modern ears it doesn’t sound dated — if it takes you back in time, that’s probably due more to the memories forever woven in with an album well worth leaving on repeat. The ripples resulting from Rollercoaster’s splash (and the Randy Rogers Band’s ascension to enduring headliner status in the independent country music market) are numerous and significant. Just for starters:

But enough about legacy: is the album any good, or did it just stumble into popularity thanks to timing and ephemeral public tastes? I’d vote that it was great then and hasn’t lost any of its luster with time — and plenty of other fans voted it as at least one of the two greatest Texas/Red Dirt albums of the past 15-odd years in this website’s recent “Ultimate Texas Country vs. Red Dirt Album Showdown” poll. Rollercoaster retains that spark, that alchemy when elements of unmistakable twang like Rogers’ distinctive drawl and indispensable bandmate Brady Black’s fiddle meet the electric crackle of Geoffrey Hill’s guitar and battle it out over the pulse of Les Lawless’ drums and Jon Richardson’s bass. It’s a buzz packed most openly on radio favorites like “Down & Out” and “This Time Around,” but more melodic straightforward country tunes like “Lay It All On You” and “Tonight’s Not the Night” retain the edge as well.

Even the unhurried waltz of the aforementioned Finlay cover “They Call it the Hill Country” is rife with barbs under that pretty melody, boldly standing up for clean rivers and intact mountains with an unmistakable thumb of the nose towards so-called “progess.” But sometimes that rock & roll edge drops out entirely: “Love Must Follow You Around” and the album-closing “I Miss You With Me” aren’t delicate (The Randy Rogers Band doesn’t really do delicate) but they do evidence a winning vulnerability that balances the outlaw swagger of the kiss-off sentiment of “This Time Around” or the gun-slinging “Ten Miles Deep” (penned by bassist Richardson, who gets in some worthwhile side-project action under the name “Johnny Chops & the Razors”). And whether the protagonist of any given song is in love, in trouble, or both, Rogers’ voice had an inescapable gravity to it even at that young age; it’s easy to scoff sometimes at an artist in their mid-20s writing prematurely road-worn and world-weary songs, but those despairing creaks in between the sonorous notes of his vocals make it seem like Rogers never had much choice. Good thing he and his co-writers were consistently up to the challenge of matching the material to the delivery, balancing out the good-time rowdiness and sincere affections with some real-world heartache and exhaustion.

At the time of its release, Rollercoaster hit a fortuitous balance. It wasn’t so far removed from other Texas heavyweights like Robert Earl Keen and Pat Green that it couldn’t sit nicely in line with them on Texas-friendly radio or nightclub playlists, but it also managed to not sound explicitly like either one. If anything, it was more of a piece with Radney Foster’s then-recent alt-country explorations or the fiddle-laced rock & roll of Reckless Kelly. Whatever debts were owed, the Randy Rogers Band has paid them in full in the decade-plus since Rollercoaster launched and defined them, enriching the state, region, and genre that they call home with their talents, hard work, and camaraderie. — MIKE ETHAN MESSICK