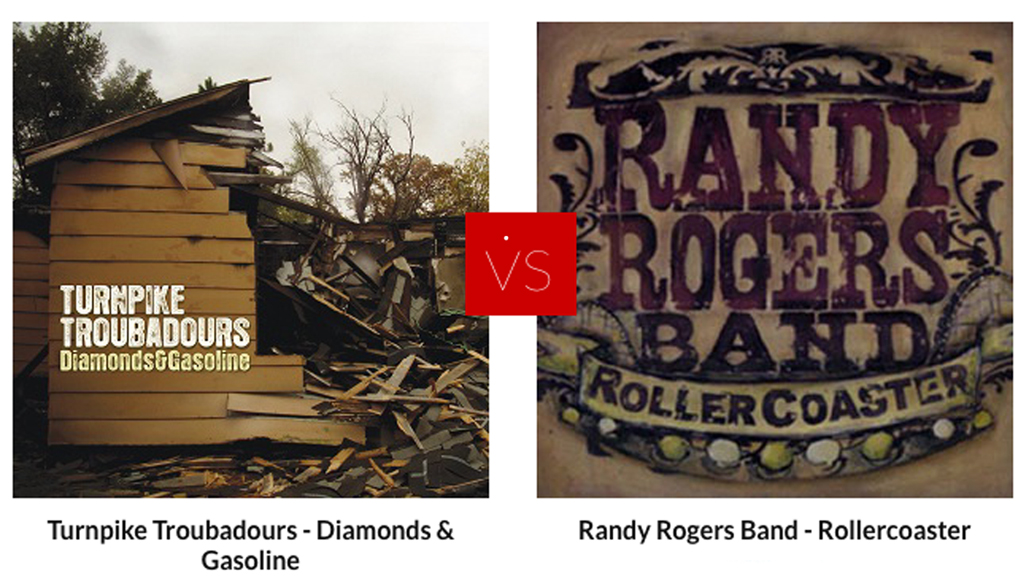 Wow … talk about the power of a last minute surge!

For most of the 24 hours of voting in our semifinals round, it looked like we were headed for a final showdown between Cross Canadian Ragweed’s Soul Gravy and the Randy Rogers Band’s Rollercoaster. The Turnpike Troubadours’ Diamonds & Gasoline and Ryan Bingham’s Mescalito both kept it close, but right up until the very last hour, that CCR vs. RRB matchup seemed like a done deal. Texas contender Rollercoaster ended up pulling off its win over Mescalito (56.2% to 43.8%), but over on the Oklahoma side of the bracket, the aforementioned surge at the polls tipped the scales in favor of the underdog Turnpike Troubadours. Final tally? Diamonds & Gasoline with 55.8% to Soul Gravy’s 44.2%. For those keeping track, that’s two classic Cross Canadian Ragweed albums bested in a row by the Troubadours, with Diamonds & Gasoline having beaten Ragweed’s self-titled “Purple” album in the previous round over Memorial Day Weekend.

So it’s come down to this. Out of an initial pool of 64 albums, two remain. And for the first time in our Ultimate Texas Country vs. Red Dirt Album Showdown, it really is Texas vs. Red Dirt. Maybe you were rooting for one or both of them the whole time. Or maybe one (or both) of them trampled one or more albums or artists you liked more on their way to the Finals. Regardless, come 3 p.m. (CST) Thursday, only one will be crowned King of the Hill. So whether you’re a diehard fan of the Randy Rogers Band or the Turnpike Troubadours or are just fiercely loyal to one particular side of the Red River, now is the time to show your colors and rock that vote. Because even though there can be no real “loser” in this matchup of two of the best albums our scene has produced in the last 17 years (aka the “LSM Era”), it sure as hell ain’t gonna be the winner buying all them Whataburger taquitos for the other side come Friday morning.