When Kent Finlay, don of San Marcos’ storied songwriter haven Cheatham Street Warehouse, passed away at age 77 on March 2, he left a hole in the heart of Texas music as big as the impact he had on the lives and careers of a veritable legion of Lone Star troubadours. But the beloved venue he devoted most of his life to remains, and his presence can still be felt inside those tin walls every night of the week — especially on Wednesdays, when dozens upon dozens of songwriters show up to share their best in front of an audience of peers and music lovers who know that songs are meant to be listened to, not talked over. That’s the Kent Finlay legacy that longtime Cheatham fan and patron Bill Whitbeck pays loving tribute to in his new song, “The End of the Bar.”

“I wrote it the day of his last birthday party, last year,” says Whitbeck, best known as the long-time (20 years and counting) bass player in Robert Earl Keen’s band. “Kent wasn’t there when I sang it, but I didn’t want to sing any other stuff that night, so I decided I’d write a song for Kent. And he always sat at that chair at the end of the bar, and I thought, ‘That sounds like a hook.’ The lyrics are not super specific, and it doesn’t have Kent’s name in it, but it’s about him and it’s just about how it feels to walk into that place and how it feels to sing a song, because he’s always going to be listening.”

Whitbeck has been a Cheatham regular since 1976, the summer he moved to San Marcos. A week after his first visit to the club, he was playing there with a band — his first Cheatham gig of many through the rest of the ’70s and ’80s. “We had a blues jam band with some of the Ace in the Hole guys that played Cheatham on Monday nights, so I was there hundreds of times,” he recalls. “And I didn’t start writing songs of my own until I was about 30, but the first place I would play my songs was always Kent’s songwriter’s night.” 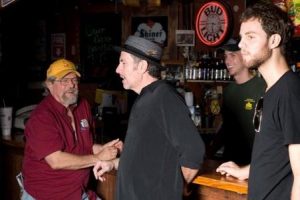 Kent Finlay (at the end of the bar, naturally) with Bill Whitbeck and David Beck. (Photo courtesy Bill Whitbeck)

Whitbeck recorded “The End of the Bar” at the Austin studio Fast Horse with his son, David Beck (who also produced Whitbeck’s 2009 solo album, Radio Caroline). Whitbeck played bass and guitar on the track, along with his son on additional guitar, Dees Stribling on drums and Marshall Anderson on harp. “We also recorded another song, one I co-wrote with Marshall, and I’m thinking about maybe putting together three or four more and doing an EP,” says Whitbeck. “But for right now, I just want people that loved Kent and that love Cheatham Street to be able to hear this song.”

“The End of the Bar”
(Words and Music by Bill Whitbeck)

Meet me there, we’ll all be there
And when you sing your new song
Whether you’re a kid or some kinda star
He’s always gonna listen to you
At the end of the bar