Lincoln Durham: “The Shovel [vs] the Howling Bones” 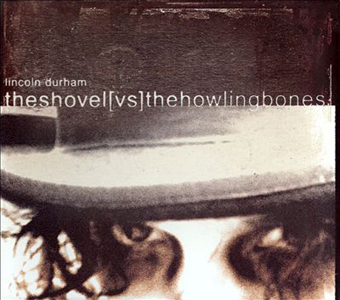 LINCOLN DURHAM
The Shovel [vs] the Howling Bones
RP

Lincoln Durham’s full-length debut opens with the ominous, funeral-march thump of Rick Richards’ booming drums, followed by the sinister, rattlesnake sting of a resonator slide guitar and a grim lyric about a wayward soul’s path to destruction and a world “burning down to ashes.” After that, The Shovel [vs.] the Howling Bones gets dark. Durham is only in his early 30s, but he writes, sings and plays primal, death-rattle blues with such frightening conviction, he probably gives even a grissled growler like Ray Wylie Hubbard (who co-produced the album with George Reiff) the willies. Four of the songs on The Shovel (“Living This Hard,” “Reckoning Lament,” “How Does a Crow Fly” and “Georgia Lee”) first appeared on Durham’s excellent 2010 EP, but the remaining six tracks here are every bit as compelling, including the disarmingly tender “Clementine,” which could loosely be defined as a love ballad. Granted, it’s a love ballad sung from the grave, but it’s the thought that counts. — RICHARD SKANSE