Lincoln Durham: “The Exodus of the Deemed Unrighteous” 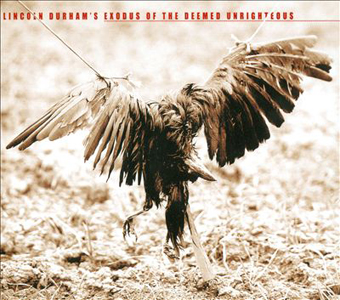 LINCOLN DURHAM
The Exodus of the Deemed Unrighteous
Droog Records

One of the most skilled and creative guitarists knocking around the Texas roots-music scene today, Lincoln Durham’s got nimble fingers and, thematically speaking, a bit of a heavy hand. If the title of The Exodus of the Deemed Unrighteous didn’t already clue you in, he’s got some pretty grandiose sentiments to go with his electric-blues mojo, but then again it worked out all right for the likes of Led Zeppelin, so why not? And there is an echo of Robert Plant in Durham’s wicked wails, holding their own against shuddering Les Paul riffs as he plumbs the depths of his soul on angsty numbers like “Sinner” and “Ballad of the Prodigal Son,” or, alternately, playfully dark tales like “Annie Departee.” Part of the challenge here is not overly compromising the one-man-band approach that’s set him apart from the pack throughout his still-fresh career, and the record toes the line nicely with some bony percussion here (“Mama”), spare-but-thunderous kick drums there (“Beautifully Sewn, Violently Torn”), and occasional downshifts to acoustic guitar (“Keep On Allie”) that fill out the stage a bit without moving the spotlight. Overall, the creative tension between the spareness of the arrangements and the largeness of the ideas lends itself well to the project; it’s only pretentious if you don’t have the goods to back it up. — MIKE ETHAN MESSICK

Next post Robert Ellis: "The Lights From the Chemical Plant"