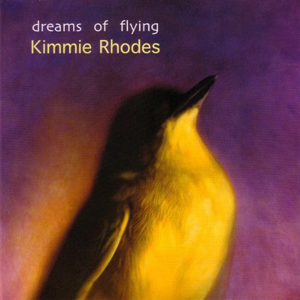 While there’s a department of it in Washington, D.C., one must really question if there’s any justice in a country that can’t recognize what Willie Nelson did years ago: that Kimmie Rhodes is an “undiscovered superstar.” Yes, he was probably smokin’ something the Feds would frown upon at the time, but the fact remains that native Lubbockite Kimmie Rhodes is just as deserving of mention in the same revered breath with fellow West Texan musical legends such as Buddy Holly, Roy Orbison, and the Flatlanders. And no, we’re not smokin’ anything. But don’t take our word (or Willie’s) for it. On Dreams of Flying, Rhodes makes the case just fine on her own, with the same elegantly crafted, soulfully beautiful and perceptive-songstress ease that she has for years, both under the radar and on somewhat more high-profile (relatively speaking) releases, like 1996’s West Texas Heaven on Justice Records.

You may be able to take the songwriter out of West Texas, but the best ones never get those lonesome plains and that endless searching for something beyond the horizon out of their system. Or their craft. Interestingly, that is most apparent on the only cover on Dreams of Flying, Donovan’s “Catch the Wind,” because in the hands of Rhodes and her duet partner, Joe Ely, the sad futility of trying to catch the wind also holds the longing hope that someday it may just be possible. The trick Rhodes pulls off so masterfully on her best original songs here (“One by One,” “Not a Cloud,” “Start Saying Goodbye” and the title track) is singing of simple, often bittersweet sentiments and scenes with such tender, daydreamy wonderment, optimism, and acceptance. On “New Way Through,” she observes, “the clouds are high, and there’s one that looks like Elvis only thinner/Isn’t it like a cloud, to be driftin’ like a lost begin-againer/trying to be a winner and looking for a new way through the world?” — GLEASON BOOTH