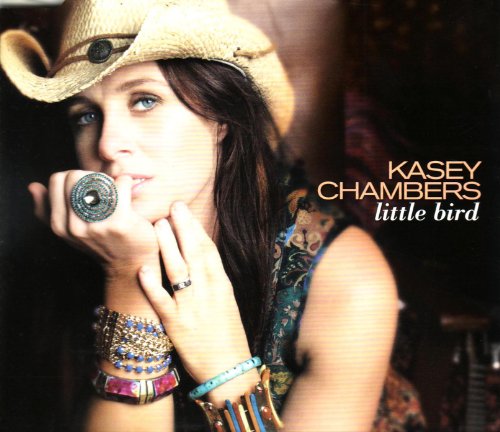 At first pass, Kasey Chamber’s Little Bird comes on so strong, sweet and irresistible, there’s a temptation to immediately declare it the Australian singer-songwriter’s best album since her justly lauded 1999 debut, The Captain — and maybe her best, period. The only problem with that, though, is that even a cursory review of the rest of her catalog serves as a reminder that she’s been consistently turning out A-grade songs all decade long. And yet, there still remains something undeniably special about Little Bird — her first self-released album as a solo artist — that makes it seem more of a career high-water mark than, say, 2006’s admittedly bolder but misunderstood (i.e., more pop than Americana) Carnival. The Captain, which introduced the Northern hemisphere to the then 25-year-old country wonder from Down Under (who’d toured and recorded for years as part of her family’s Dead Ringer Band), sounded unlike anything else going in roots music at the time. With a peculiar but utterly fetching voice (like a precocious 5-year-old after a whiskey and cigarettes bender), Chambers sang a dozen remarkable original songs that married the poetic eloquence of Lucinda Williams at her most sincere with melodic hooks worthy of Shania Twain — and that’s absolutely intended as a complement. Those same qualities are on equally fine display across the whole of Little Bird, which brims with a giddy exuberance that isn’t hampered at all by the appropriately older and wiser bent of the lyrics. It’s a wisdom that’s best exemplified in the title track, described by Chambers herself as “the strong, secure version of ‘Not Pretty Enough,’” the single from her 2002 sophomore album that dared to turn the earnest-meter all the way to 11 and just got away with it. In “Little Bird,” she’s all grown up and past caring about ways to win acceptance — be it from a love interest or even the fickle music industry: “I don’t want you that bad,” she sings with an air of liberating confidence. The old insecurity still peeks out occasionally (“Invisible Girl,” “The Stupid Things I Do”), but the contrast only enhances this all-together terrific portrait of the artist as a 10-years-older young woman. Now married with two young sons, she’s no longer “just a kid,” as she claimed to be on The Captian’s “Cry Like a Baby,” but that’s still OK, because as she puts it so effectively in the grateful mother’s prayer of “Beautiful Mess,” “I failed a thousand times, but it keeps me trying.” If that’s the case, consider Little Bird the charm. — RICHARD SKANSE