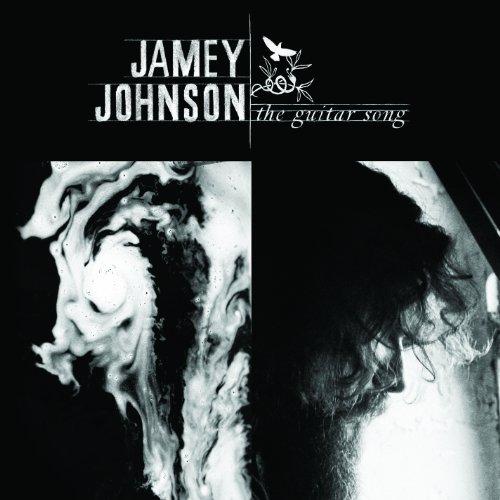 Leave it to Jamey Johnson — a hickory-voiced ex-Marine who sings country music like a guy cryogenically frozen in 1975 — to make blue skies a metaphor for sad times, as he does on “Even the Skies Are Blue.” That song concludes his new album, The Guitar Song … sort of. It actually concludes the “Black” half of the two-disc set, which also has a “White” counterpart.

Johnson, the most promising newcomer Nashville has produced in a generation and the kind of singer who can effortlessly pull off rhyming “damn” with his native “Alabam,” missed the memo about iTunes. Stubborn and defiant, he made one album by Music City rules (2006’s The Dollar). It wasn’t all that good. Then he went on a bender, got divorced and lived to write about it two years ago with That Lonesome Song, a concept album about a life knocked out of orbit. He’s gone conceptual again with The Guitar Song, stuffing 25 songs into a double album.

On the surface, the difference between the “White” and “Black” albums is that the former is a bit sunnier in both sound and lyrical tone. But there are other differences. The “Black” album is full of more internalized songs told from the point of view of people struggling during hard times. It opens with “Lonely at the Top,” a sprightly sounding Don Cook-penned song with a bit of humor that finds a successful singer whining to a barfly about, well, exactly what the title says. “I’ve worked up a powerful thirst just listening to all your troubles,” the guy tells the singer.

Johnson’s voice is a perfect counterpart for the old Vern Gosdin chestnut “Set ’Em Up Joe,” which plugs him into a grand country timeline. In less than three minutes the song manages to pay lip service to Gosdin as well as Hank Williams, Lefty Frizzell and Ernest Tubb. Perhaps the weight of this is less novel in Texas, where contemporary artists survive (if not exactly flourish) playing classic country. But name-checking country music’s Mt. Rushmore figures is all but a dead art in Nashville.

He stumbles a bit on “Playing the Part.” No big surprise, Los Angeles — where “promises break like an egg on the hot asphalt” — doesn’t agree with him. But for starters, who breaks eggs on asphalt? Johnson’s better than rote regionalist fish-out-of-water songwriting, which makes the a clunker like “Playing the Part” stand out far more than it might on an album by a lesser artist. But before you even have time to fret about him slipping, the “Black” album rights itself, particularly on the sensitive “Baby Don’t Cry” and the pot-grower’s lament “Can’t Cash My Checks.”

The “White” album is a nice counterbalance, its songs more external and (mostly) sprightly. “By the Seat of Your Pants” is an uptempo entry in the elder-giving-advice subgenre. And though “California Riots” reemphasizes a point made previously on the “Black” album (“I’ll dabble with the fortune and rub elbows with the fame, but I’ll be damned if this is where I’m gonna die”), it has more instrumental kick.

There’s still some somber fare on the “White” side. “That’s Why I Write Songs” and the album’s title track are both quieter and more contemplative, dusted with a bit of melancholy. But Johnson and his band kick it into high gear again on the soulful “Macon,” a song so full of sexual longing, its titular town might as well be a verb.

The obvious question is, did The Guitar Song need to be so long? Maybe not. But even though a few songs break the spell, they’re rare — and bean counter types likely wouldn’t have cottoned to an 18- or 20-song double album when that many songs would fit on a single CD. The Guitar Song was clearly meant as a bifurcated piece of art, and it functions very well as one. To have cut this daring album in half and slam it onto a single disc would’ve been a slight worse than being stuck in California. — ANDREW DANSBY