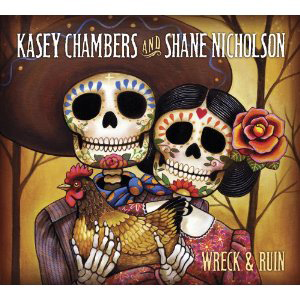 Kasey Chambers and Shane Nicholson may be from the Land Down Under, but they draw as heavily on the influences of American roots music as any act on the Americana scene today. The songs on Wreck and Ruin, the couple’s second album together, are full of hard luck, hard times, and hard-bitten characters facing a life that’s bound to bring more of the same. “Adam & Eve” sounds like an old-time banjo ballad and tells the familiar Biblical tale with a touch of wry humor: “We’re on the run with God on our trail,” they sing with a jaunty presence. “Familiar Strangers” is a sold country tune addressing a dying relationship. “Wreck and Ruin” salutes self-destruction, poverty and eco-disasters with a bouncy two-step beat, and the stomping “Sick As a Dog” thumbs its nose at sickness and death. The subject matter may be grim, but Chambers and Nicholson never succumb fully to the dark and dour; their refreshing Aussie take on Americana music is chock-full of energy and a spirit of resilient optimism. — J. POET