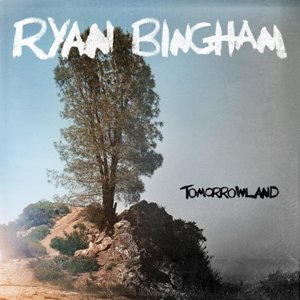 To folks who know him only from the Crazy Heart soundtrack or 2010’s T. Bone Burnett-produced Junky Star, Ryan Bingham’s new record, Tomorrowland, may seem like a risky move. Gone is the finely etched melancholy of the previous album and Crazy Heart’s Oscar-winning tune, “The Weary Kind.” It’s been replaced by a much more brazen sound with a heart full of rhythm and a handful of rockers that clearly owe a debt to Led Zeppelin and perhaps even punk rock, at least in attitude. The Bingham announcing himself in “Guess Who’s Knocking?” couldn’t sound less weary and beaten; he sounds ready to throw down full force: “Guess who is knocking on the door? It’s me, motherfucker, I’m knocking on the door!”

Of course, to longtime, loyal fans (and with Bingham that’s a huge percentage of his audience), this show of vigor really shouldn’t be that shocking. In fact, for most of his fans, the pristine misery of Junky Star was the anomaly, even though it still contained more murder and mayhem than the average rap album. By contrast, the muscular grooves of Tomorrowland find Bingham picking up where 2009’s Roadhouse Sun left off — albeit with admittedly more aggression and minus his longtime band, the Dead Horses. This is a true solo effort, with Bingham not only co-producing (with Justin Stanley), but also playing most of the guitar — usually plugged in and cranked to 11. The result is not so much a radical left turn for Bingham as it is an assertion of his independence. He is confident enough in his vision to employ a “Kashmir”-like string section on opener “Beg For Broken Legs” and to make the album’s centerpiece an eight-minute song called “Rising of the Ghetto.” The former is far more successful than the latter, but none of Bingham’s peers would ever even attempt anything that audacious. Actually, that’s not really fair, as Bingham arguably doesn’t have any peers at the moment, with the exception of Hayes Carll. And like Carll, he is constantly pushing himself beyond the boundaries their contemporaries set up for themselves.

Is Tomorrowland a masterpiece? Not really. Some of the slow songs echo Junky Star a bit melodically and some of the chances he takes are more interesting than successful. However, it is a legitimate question to ask as Bingham is clearly headed toward making an album that will stand as a masterpiece and defining moment. He’s not there just yet, but Tomorrowland is another fascinating leg in the journey. — GREG ELLIS