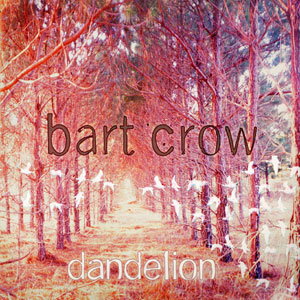 Suggesting that most Texas singer-songwriters take pride in offering up original work is a bit like saying Willie doesn’t mind the occasional toke. It just basically goes without saying. But there’s no shame in making good use of just the right outside material, as Austin’s Bart Crow proves with the two choice covers that give his band’s new album, Dandelion, an added wallop of heart and emotional depth. The title track is a bombastic take on Texas-based Matt Powell’s majestic signature tune that preserves the song’s confessional integrity while augmenting its overall vibe with barroom sing-along big-ness worthy of hoisting one’s beer into the smoky air. The other song not from Crow’s own pen is the emotionally gutting “If I Go, I’m Goin’,” by Gregory Alan Isakov. With the sweet vocals of newcomer Macy Maloy helping out, this is the stellar ballad that Crow has been waiting to put out for years. The original tunes will no doubt please longtime fans, especially “Didn’t Mean to Break Your Heart.” That one would probably be a rather dour ballad in other hands, but Crow makes its sorrow both anthemic and exalting. — KELLY DEARMORE

Next post Kasey Chambers and Shane Nicholson: "Wreck and Ruin"