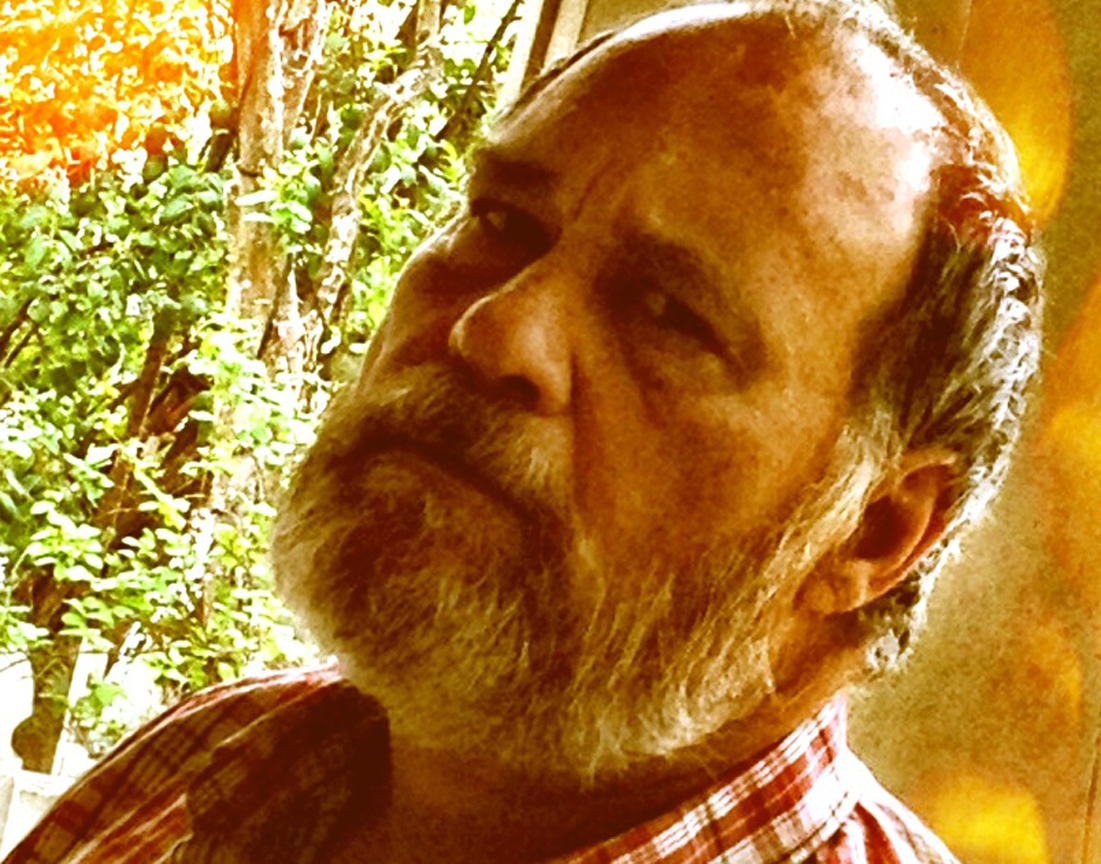 Nothing better than a bear. (Photo JonDeeGraham.com)

Jon Dee Graham has been known for decades as a top-notch singer-songwriter and guitarist; he’s the only three-time inductee into the Austin Music Awards Hall of Fame (for his work with the Skunks, the True Believers, and as a solo artist). In addition to performing with artists as diverse as John Doe and Kelly Willis — and forming the Hobart Brothers & Lil’ Sis Hobart with Freedy Johnston and Susan Cowsill — he has shared countless Wednesday-night bills with James McMurtry at the Continental Club.

But since August of 2010, Graham has been gaining renown for another art form: paintings and drawings, usually featuring a sensitive, Pooh-like bear. Since he sold his first piece — and most of the 22 others — at his maiden-voyage exhibit, The Bear Had An Unquiet Mind, at the Continental Club Gallery (where he was so nervous, fellow True Believer Alejandro Escovedo showed up to lend moral support), Graham’s bear art has become so popular, when he offers them online, they’re often sold in minutes. 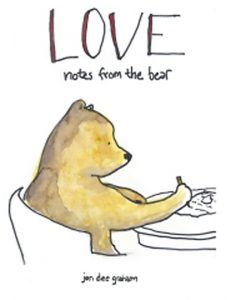 He’s just published his first true book-form collection, Love Notes From the Bear, a 52-page compendium of notes to his wife, Gretchen, aka “the professor,” usually as he was leaving on some errand. One shows a bear sitting at a table under a row of colorful string lights. “Gone for coffee …,” it reads. In another, a gruffly determined bear mutters, “Off to face my day.” Underneath is the line, “I will also be loving you.” The center spread is a simple delight. One page contains a yellow bear holding a bag of seeds over his shoulder, its contents spilling out as a flock of birds trails behind. “Gone to Callahans for you and your birds. Large espresso pot is ready to go,” it reads. On the facing page, a bear in black charcoal prepares to face the elements. “Gone to buy cigarettes and art supplies … must make bears,” it reads. “9:30 a.m. (It’s not THAT cold.)” On just about every page, the word “love” is scrawled in capital letters.

Unbenownst to Graham, his wife saved every note — some hurriedly scribbled in pen or pencil, some elaborately colored with markers, pastels or even watercolors. To say the 8½ x11-inch, $35 paperback is charming is an understatement; it’s a diary of sweet little messages that add up to something big and priceless: LOVE.

Lone Star Music recently caught up  with the very busy bear himself to discuss his art — via email — while he was in the midst of recording a new album in Knoxville, Tennessee. The capital letters are his.

[Thursday, March 3 was declared Jon Dee Graham Day by the City of Austin. On March 4 at 5 p.m., Graham, who just celebrated his 57th birthday, will perform and sign copies of the book at Waterloo Records, 600A N. Lamar Blvd.]

Do you remember the first piece you sold? Were you surprised that people were interested in buying them?

It was a bear leaning on a bar, talking about drinking versus not drinking. I wish I had it back. The bears were always something I did when I was bored or killing time before soundcheck or riding in the bus/van/car for hours on end. I have one longtime friend that produced a bear from ’86. When I would stay at people’s houses I would draw a bear thanking them for their hospitality, and when I’d come back a year later it was FRAMED on their wall.

When did you realize you could have a second career as a visual artist?

It’s a fairly new notion; over the last four years it has just kept growing and growing. I think I can legitimately say I have a second career now, but it’s still kinda funny when I say it out loud.

Weirdest part is now there are people buying my art who are completely unaware that I am a musician. “Oh really? What sort of music do you PLAY?”

What, if any, art training/background do you have?

None. Tracing my hand to make a drawing of a turkey when I was in second grade. Like that.

Your bears have a Pooh-like quality that I think helps attract viewers because it gives them something familiar to identify with, and they’re incredibly expressive, but not harsh — even when the emotions they convey may be on the negative end of the spectrum. What are the most common reactions you hear from fans of your work?

I like to think my bear is like Pooh would be if he were kicked outta of the Hundred Acre Wood, made to cut the crap, get a job, lose a job, get his heart broken a few dozen times, realized that Piglet and Eeyore were perhaps NOT the kind of friends who make you a better person but that Tigger was always good for mixing things up. You know. But I think it goes way past Pooh … people have been fascinated by bears ever since they met. From Shakespeare to John Irving to The Revenant. There’s just SOMETHING about a creature that is so beautiful and whimsical and yet can break your back with a single paw and then eat your face.

How did you decide which drawings to include in the book? How many did you start with?

I didn’t. It was curated by my wife, Gretchen. She had stacks and stacks … no way I coulda done it.  And it was designed and my IT guy, William Harries Graham.

The book almost amounts to a daily diary. Were there notes that were too personal to include? Do you keep an actual diary, and if so, is it filled with bears?

OF COURSE there were a number of notes too personal or raw to include. But I feel like she hit a nice balance between the mundane and the pretty goddamn open.

You use markers, watercolors … any other media?

In my work-work, I use India ink and watercolor, acrylic on canvas and board, charcoal, stencils; I’m always looking for something that rings the bell. The notes, on the other hand, are largely whatever is close by.

Some of these notes are simple sketches; others have more detail, multiple colors, etc. How long does it take you to get out of the house? And how do you decide how much effort to put into each note?

Yeah, sometimes I get so involved with painting the note, I forget that I’m going somewhere. And there’s no deciding how much effort it deserves … it’s not done till it’s DONE.

I see there’s one in there with no bear — and it’s quite charming. Do you ever create non-bear art for public consumption?

Oh yeah. Most people want the bear, and that’s terrific because I love doing it … but I’m always drawing all kinds of stuff. Which is starting to sell, too.

You sometimes include birds, butterflies or gorgeous skies … is it coincidence that they show up regularly, or do you feel a strong relationship to those particular images as well?

Well, the birds are because our backyard is like bird sanctuary … we have generations of cardinals and blue jays and even a looney woodpecker who hangs out back there. Lately, I’ve been obsessed with mockingbirds … they’re just so goddamned elegant. And aerodynamic. The other stuff is because I love the color against the bear. Or maybe I just love the colors.

You previously did a calendar, if I’m not mistaken. And you mention animation in one of these notes. What’s up with that? Is your bear coming to life as a moving figure? What’s up his furry sleeve? Are other bound collections in the works as well?

This year was the second year we put out the calendar. People expect one now. I collaborated with Matt the Electrician, providing bits of bear animation for his song “Bear,” but it has yet to see the light of day. It was pretty old-school stuff I did, sorta a jittery Friz Freleng look from his barnyard animation years. Now, THAT’S a lotta work. ENDLESS drawings. But fun as hell.

Each piece you sell is one of a kind, right? Have you considered doing prints?

I actually do some low-end digiprints, so that they are available/affordable to everyone, but mostly I enjoy that there is only one of each. It’s like a performance of a song. But there are many, many, many of them I wish I still had. But you gotta share, right? I can always do one for myself.

You have a tradition of drawing thank-you notes, etc., for friends. I happen to know they brag about having a personalized Jon Dee original. Did you ever dream your drawings would be so valued by their owners?

Honestly, no, never. But it makes me happy that it makes them happy.

You also take commissions; is it hard to create to someone’s specs or is it more about general subject matter? Seems like they could be kind of a neat challenge, like writing a song with certain words in each verse. I’m speculating, of course.

No, you’re absolutely right … I get to draw things that I didn’t dream up; stuff that someone else sees. A few of those have been my favorites. Plus sometimes it pushes me outta my comfort zone, like, “well, I guess NOW I’m gonna have to learn how to draw a button-concertina or a Harley Davidson Knucklehead.”

You just recorded an album in Knoxville. Care to include any details?

No, that’s still pretty hush-hush. Except that it’s really different than my other records. I’ll tell you this: working title is Knoxville Skyline.

Anything else I should have asked?

Yes. “Do I feel fortunate? Yes. Yes I do. Every single day.”