LSM Throwback Thursday Review Slobberbone: "Everything You Thought Was Right Was Wrong Today" (2000) 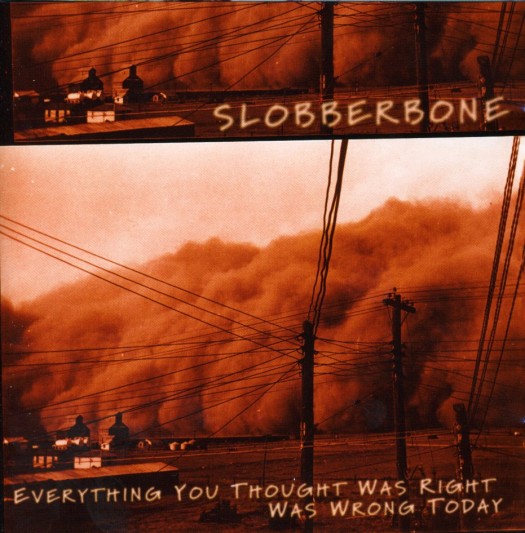 SLOBBERBONE
Everything You Thought Was Right Was Wrong Today
New West

With all due respect to Gram Parsons (and all humble recognition of what grandiose unofficial titles are actually worth), maybe Neil Young is the real “Father of Alternative Country” as we know it today. There’s a whole strain of alt-country – scruffier, louder, ornerier, more explicitly cross-bred with punk rock – that owes little to the sweet, soulful gone-too-soon memory of Parsons but much to the scrappy, noisy, sometimes confrontational and still-ongoing legacy of Young.

None of this is meant to pigeonhole the perennially underrated Denton, Texas alt-country combo Slobberbone as a bunch of Crazy Horse revivalists. Frontman/songwriter Brent Best’s whiskey gargle of a voice is a far cry from Young’s keening tenor, and his figurative voice as a songwriter is a sometimes-funny, sometimes-harrowing, often-both rapid-fire beast all its own. But as the band aged into its third and almost inarguably best release, 2000’s Everything You Thought Was Right Was Wrong Today, it was fair to say they weren’t lumping themselves in with the prettier sounds and sentiments of, say, Son Volt or the Jayhawks. If anything, they were a better fit with their fellow Dentonites the Old 97s, or their frequent tourmates the Drive-By Truckers, or maybe even their spiritual forefathers the Replacements (tellingly, this record was produced by onetime Replacements collaborator Jim Dickinson). But mostly, Slobberbone just sounded like themselves.

The apocalyptic-looking dust storm on the cover and the ponderously awesome title were good place-setters for the album’s leadoff track “Meltdown,” a swirling ¾ time vision of the world’s end. “Soon a figureless shadow will block out the sun/Hey baby it’s the end of the world, I hope you had fun,” Best growls, and that sort of smart-assed assessment of doom figures in heavily throughout. “Trust Jesus” follows around a born-again graffiti artist as he tags his Christian message throughout the land, cheerful in his servitude but also sure that “one day this world is gonna curl up and burn/it’s gonna choke on its own tongue and die of its own thirst.” The grateful but hopeless lover in “Lumberlung” is sick and he ain’t getting any better, and the departed lover in “Josephine” isn’t coming back no matter how many drunken tears you shed in the gutter.

If the preceding paragraph hasn’t made it clear, here’s one more thing: this album is funny. Yeah, it’s a kiss-my-ass, standing-at-the-gallows sort of funny, but the absurdity and sarcasm baked into it cut through the melancholy like a buzzsaw. The title track springs from the centerpiece track “That Is All,” an all-time kiss-off classic that crunches away eruditely on the indignities of a breakup before circling back around to the refrain: “There is just no easy way to say, everything you thought was right was wrong today/That it all … go away.” Best’s blustery, winking delivery puts the extra stank on it, and a weirdly beautiful mandolin solo floating atop the distorted power chords around the midpoint hints at the band’s knack for mining musical incongruity to comic ends (for a master class on this, check out the tuba-heavy Salvation Army Band feel of the album-closing “Pinball Song,” the cheery horn section buoying the breakneck punk of “Placement Blues,” or the ludicrously non-solo guitar solo on their earlier favorite “Engine Joe”).

While they could match the grunge-rock giants of then-recent memory angst for angst, mayhem for mayhem, Slobberbone did their Generation X cohorts one better by embracing their own slackerhood and copping to their misfit status without self-pity. “Lazy Guy,” guested on by the Drive-By Truckers’ Patterson Hood, is “amazed at the way some people try and try and try,” and “Gimme Back My Dog” amusingly counterbalances Best’s wordier anthems by basically containing ten words and being wildly catchy anyway. “Some New Town” chimes in with “I hope you live, where everyone’s happy/And I hope you live, where nothing is crappy,” and it’s both amusingly crude and refreshingly direct. Slobberbone was also achingly sad, bracingly bold, disarmingly twangy, and so rock ‘n’ roll, it hurt. — MIKE ETHAN MESSICK