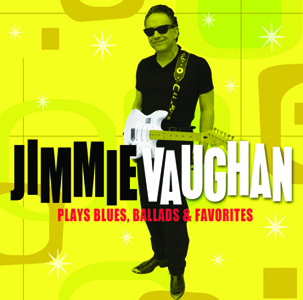 Record buyers first met Jimmie Vaughn 30 years ago as the guitarist in the Fabulous Thunderbirds, a gritty four-piece R ’n’ B band that played a lowdown, Lazy Lester-inspired brand of roadhouse blues that was light years from the powerhouse crunch of ZZ Top or the manic shredding of Johnny Winter. The T-Birds’ game was tunes, tone and timing, and through an illustrious career that has seen six albums with the Fabulous T-birds, four solo records and a couple high profile collaborations, Vaughn is still at the top of that game.

On Blues, Ballads and Favorites, Vaughan takes a trip back to the music that inspired him to pick up a guitar, the type of songs wide-eyed teenagers would hear from Border Blaster radio stations in the ’50s and ’60s when popular culture was much more segregated and it took a bit of effort to find the good and greasy stuff. Vaughan and company work out on songs made regionally famous by Roscoe Gordon, Lavern Baker, Johnny Ace and Billy Emerson. He takes a trip back down the Jimmy Reed highway with “Come Love” and revisits the T-Birds crowd pleaser “Roll Roll Roll.” Always generous with the spotlight, Vaughn hands organist Bill Willis the microphone for a smoky take on Willie Nelson’s “Funny How Time Slips Away.” Longtime cohort Lou Ann Barton duets on several songs, including the swamp-pop classic “I’m Leaving It All Up to You,” and takes the lead on Little Richard’s “Send Me Some Lovin’” and a raw, bluesy pass at the pop standard “Wheel of Fortune”.

Covers albums, especially of older material, can be a slippery road; reverence can turn to parody and daring interpretations can be disrespectful. Vaughan and company easily get through those obstacles with the lifelong dedication and skill they’ve put into this music. While Vaughan will always be known as a guitarist, his vocals are expressive and soulful and the arrangements focus on the songs over instrumental flash. This record is a valuable tool for aspiring guitar players and record-collecting blues enthusiasts, but more importantly, it’s a perfect soundtrack to a low and slow, late evening drive. — ERIC HISAW