Jim White: “Where It Hits You” 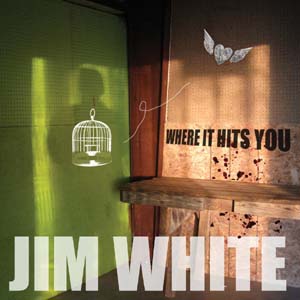 JIM WHITE
Where It Hits You
Yep Roc

Released on David Byrne’s adventurous Luaka Bop label, Jim White’s extraordinary 1997 debut, The Mysterious Tale of How I Shouted Wrong-Eyed Jesus!, sounded like ghostly Appalachian gospel music from outer space. Where It Hits You, the Pensacola-born songwriter’s first release on Yep Roc, proves he’s still no closer to mainstream convention, and praise you-know-who for that. White’s peculiar strain of spookily atmospheric Americana may be an acquired taste, but it’s hardly impenetrable. Beauty abounds here in even the darkest moments, and there’s a fair amount of humor and whimsy, too, with four songs right in the middle of the album espousing a certain “cock-eyed state of grace” via playful instrumentation and fractured sing-along choruses. But it’s White’s lyrics that really hit you: from the building sense of urgency implicit in the opening prayer of “Chase the Dark Away,” to the vivid emotional snapshots of “The Way of Alone,” and the heartbreaking account of a wasted life in “My Brother’s Keeper.” White doesn’t sugarcoat the harsh realities of life: “On the best of days,” he muses in “Epilogue to a Marriage,” “still there’s hell to pay.” But he doesn’t flinch from them, either. As he dares in “Infinite Mind,” “Let us sleep in poison ivy, let us roll among the weeds/Let us wear our ragged hearts upon our tattered sleeves.” — RICHARD SKANSE

Next post Gene Watson: "Best of the Rest: 25 Greatest Hits"