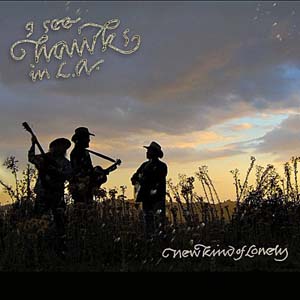 I See Hawks in L.A. have been knocking out fans on the West Coast for 11 years with a sound you could call Country Noir. They’ve distilled their own heady brew out of a combination of California Cosmic Cowboy music, jam-band instrumental proficiency, old-fashion psychedelia and a real love of pre-Nashville honky-tonk country with a taste of bluegrass in their three-part harmonies. Lyrically, however, they’re a bit outside the box, as you might glean from a song title like “Big Old Hypodermic Needle.” Chris Hillman, Rick Shea and other heavies have sung their praises and sat in on their album sessions; but although they’ve toured all over the U.S., England and Europe, they’re still not as well known as they should be. Hopefully that will change with New Kind of Lonely, probably their best album so far, packed with tunes that sound like tomorrow’s country standards. The mostly acoustic outing, like their previous efforts, is full of sparkling musicianship, Rob Waller’s emotive vocals, and an odd melancholy that’s part country and part Raymond Chandler. “Big Old Hypodermic Needle” is a traditional tune about self-destruction, but the needles and Vicodin let you know this song didn’t come from Nashville. Likewise “Your Love is Going to Kill Me,” which opens with a reference to James Joyce’s Ulysses. The melody is pure country, but the feel has a hopelessness that brings to mind the work of Townes Van Zandt. The Hawks show off their bluegrass side on “Hunger Mountain Breakdown,” featuring fine banjo work from Cliff Wagner, Paul Lacques on Dobro and longtime associate Gabe Witcher contributing some excellent fiddling. Like other California cowpokes, the Hawks manage to stay true to country music’s roots, while nodding to their home state’s freaky reputation, exemplified by the lighthearted “I Fell in Love with the Grateful Dead.” Lacques plays Garcia-like lead lines that weave in and out of the mix, while Waller reminisces about joints smoked, chicks romanced, and organic curries eaten. — J. POET