Javi Garcia vs. “The Great Controversy” … round 2 The uncompromising Texas rocker and detail-obsessed graphic artist spent three years bringing his 2013 sophomore album to its final vinyl destination. And it was worth the wait. 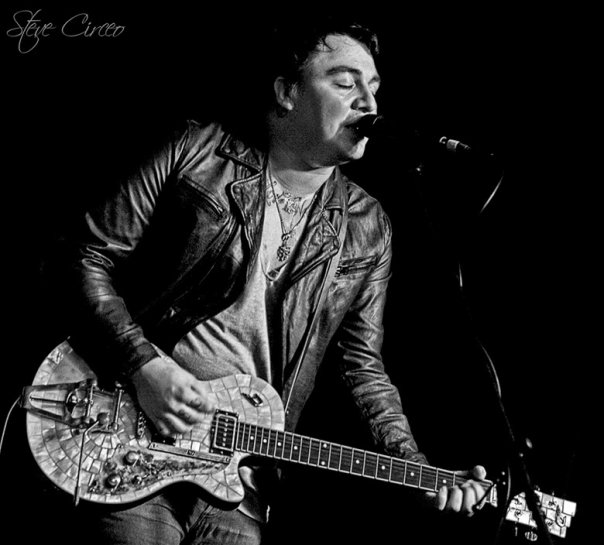 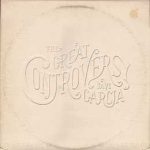 “The Great Controversy,” in the beginning …

Songwriter Javi Garcia does not work in half measures. His 2010 debut, A Southern Horror, proved as much with a bang, shotgunning 16 tracks (five of them from a previously unreleased 2008 EP, Madly in Anger) of sinister, Sticky Fingers groove and unrelenting bloodshed across two discs — both on CD and crimson vinyl — that heralded the arrival of a bold new voice ready to wreck unholy havoc on the Texas music scene. Garcia, also a talented graphic artist and painter, designed the suitably spooky album artwork himself, leading to steady side work doing the same for peers and friends like Mike McClure and Dustin Welch. But when he first released his sophomore album, The Great Controversy, on CD and as a digital download back in April 2013, the original cover seemed curiously understated: just his name and the album title on a white background, stained with a yellowed ring to look like an old vinyl sleeve. The music inside — raw, brutal and uncompromising — delivered on the promise of his debut in spades, but the packaging felt a little, well, rushed.

“For the CD, I did kind of want to leave that almost blank in a sense, to have the focus be on the music itself at the time,” admits Garcia, calling from his home in New Braunfels. “But I always knew I wanted to release it on vinyl, and I knew that that was going to be kind of the nail in the coffin, so to speak — closing the door on this record and moving on to the next project.” He notes that the album’s tracks were deliberately sequenced with vinyl in mind, with the first five songs on “Side A” — including the Luciferian title track and the unabashedly Stonesy “Josephine” — “picking up where A Southern Horror left off” and serving as a bridge to the more evolved but even rawer and more chaotic five songs comprising “Side B.”

“I always hoped to that the listener, once they got through with the album, that they’d think, ‘Well, shit, where is he going from here?’ That’s the way I felt walking away from the record, and I still feel excited for what’s next.”

What he didn’t know at the time, though, was that it would take him the better part of three more years to see the project through to completion. “Once the wheels started turning on getting the process going for the vinyl, I ended up running into a lot of obstacles,” he offers matter of factly. Pressing vinyl is always a costly endeavor for an independent artist, but funding wasn’t necessarily the issue; Garcia had already raised $17,302 for the making of the album through Kickstarter, nearly five grand over his target price. Nor was it just a matter of waiting his turn in line, which is par for the course these days given the limited number of record pressing plants both home and abroad trying to keep up with resurgent popularity of vinyl in the last decade. No, the biggest “obstacles” in Garcia’s way were all of his own design — literally.

“I really wanted to take the time to figure out what I wanted to do with the vinyl, to really make it different,” he says. “I wanted to find a way to kind of interact with the consumer’s senses other than just auditory, and it took me forever. I was thinking, ‘Well, maybe I can do some kind of illusion, if I can kind of dream up just … something else.’ And to be honest, I was lying in bed, and I don’t know if I was half asleep or if I really was dreaming, but I just thought, ‘Oh shit, it can be glow in the dark! I can hide something. I can show them something in the light, and when it’s dark, I can show them something slightly more creepy.’”

As for what that something more creepy would be, well, the Devil was always in the details — just as he in the album’s title track, taunting the listener about the apparent fallacy of free will. That, explains Garcia, is what “The Great Controversy” is all about: the debate between the concept of free will vs. pre-destination.

“I’ve always been into religious themes and stuff like that,” he says. “It’s just part of growing up Spanish Catholic — you’re surrounded by all that kind of scene. And, I’ve always been really intrigued by the idea of good vs. evil; it’s just such a classic theme. So for the artwork, initially I thought, maybe in the light we can show a Jesus figure, and in the dark you can show the devil. And I ended up spending about nine months trying to make that work. But it just wasn’t happening — it sounded good on paper and in my mind, but blending those two images together just wasn’t working.”

That’s when he finally made the fateful (pre-destined?) decision to call in some help, reaching out to one Matthew Skiff. “He’s this artist out of California that I’m a big fan of,” Garcia says. “I kind of ran the idea by him, and we ended up emailing each other a bunch of different concepts. We must have gone through probably 30 different sketches by the time we settled on the final one.” Problem was, though, was that Skiff’s schedule was so busy, he wouldn’t be able to really work on Garcia’s project for yet another nine months.

“And that was a big decision for me,” says Garcia, “because obviously I guess I could have done it myself, but I just felt like on my own I couldn’t do what I wanted to do. And I wanted to do it right. So I went ahead and just made the call and told him, ‘I’ll wait for you.’ And I’m glad I did, because it wouldn’t have been the same without him. In fact, it’s mostly him — he’s credited. And that’s actually the first time I’ve ever collaborated with someone else on something of mine.” 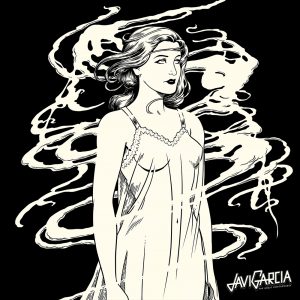 “The Great Controversy,” in the light …

The last crucial piece of the puzzle, of course, was finding a pressing plant that could do the finished package justice. After a lot of calling around, Garcia contacted Noiseland Industries out of Chicago, based on a recommendation from fellow Texas artist Lincoln Durham, and asked if they were up to the task. “They told me, ‘We’ve never actually done that before, but we can try it,'” recalls Garcia, noting that he was actually encouraged by the fact that his concept was unique enough to be deemed a challenge. “They ended up having to send me some test prints, just trying to figure it out on their end, and they did. But they also told me that they weren’t going to be able to tell me if it actually worked until the very end, after we had printed all of them. So I was like, ‘Shit … well, let’s just do it.’ Took a chance on it! And finally they emailed me back and said, ‘It’s all done, here’s the remaining balance on the invoice …’”

Garcia can’t help but laugh. “I read that and was like, ‘Well, did it fucking work, or not?’ I emailed them back and asked if they could send me some photos, and they went, ‘Oh no, it’s great! Don’t worry about it, it came out perfect.’” 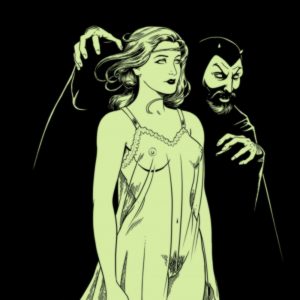 Sure enough, after three long years of gestation, the vinyl edition of The Great Controversy — limited to 500 copies and released this week (Feb. 26) — really is a stunning work of pop art. In the end, the “Jesus figure” Garcia wrestled with for so long early on wound up being an alluringly beautiful young woman in a nightgown, staring off into the distance and surrounded by a mysterious mist. But the Devil still gets his due: Turn the lights off, and Old Scratch appears looming over her shoulder in glowing eerie green. (That the woman’s nightgown also happens to reveal a little more when it glows in the dark was, naturally, unavoidable.) The record itself is pressed on 180 gram marbled green vinyl (and properly mastered for the format, too.) The whole package feels (and sounds) like the genuine labor of love that it was, and Garcia’s fans who have already gotten their hands on it have responded in kind.

“I’ve already gotten several emails from people saying it’s one of the coolest pieces in their collection,” Garcia says. “Which is cool, because when you work really hard on something like this, it’s really nice to hear that it’s appreciated. And I really can’t stress how proud I am of it.”

Happily, that goes for the music, too. “I have no regrets about any of it,” he continues. “I listened to it this last time when I received the vinyl, and there was never a moment where I was like, ‘Ah, I wish we had changed that …’  That’s because I’m pretty detailed oriented, and being the producer, by the time I was finished with the recording, I had already decided that this was the the way it was supposed to be. And holding it now on vinyl, with the artwork and the colors and textures and all that stuff, ahh … it’s just perfect to me.”

And now, at long last, he can finally move on to his next project. “I’ve already written several things down where Album No. 3 is starting to come together, so the wheels and gears have started turning. As for what it’s going to be, we’ll see what happens — but I would like to put something out at the end of this year, or if not, early next year.”

With any luck, that new record will make it to vinyl sometime before 2020.

Next post All Aboard: The Old 97’s and friends join forces to raise money for charity:water