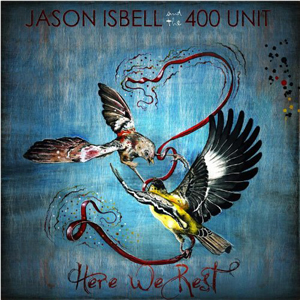 JASON ISBELL AND THE 400 UNIT
Here We Rest
Kirtland Records

Jason Isbell’s Here We Rest is filled with may-not-be-able-to-deal-with-it melancholy and a truly rare balance of deft nuance and gut-wrenching directness. Traveling somewhere between John Prine at his smartest, bluest, and most observant and the Muscle Shoals glory years, Isbell bounces between suicidal resignation, uncertainty, regret, and a glimmer of hope in this suite about lost love and the recovery from it. These are blue-collar songs of hard livin’ and painful loss that must be worked out in a van or on a stage while trying to pay the bills. From the first plaintive notes of “Alabama Pines,” where a man is moving into an apartment and trying to make sense of and reassemble his life after a break-up, Isbell issues killer song after killer song; there isn’t a weak moment on the entire set. Highlights include “Codeine,” which has a hook that will haunt you in the wee hours of the night; “Heart On A String,” a Muscle Shoals soul number that could’ve been a radio hit in the days of Otis Redding; and the final “Tour of Duty,” a wry, wise homage to this generation’s returning soldiers filled with poignancy, maturity, a quiet non-partisan patriotism and choke-you-up lines like “we’ll laugh like little children telling secrets/probably cry like old women drinkin’ gin.” A quiet masterpiece that truly separates Isbell from his former band Drive-By Truckers, Here We Rest ranks with Lucinda Williams’s Car Wheels On A Gravel Road and qualifies easily as one of the top candidates for 2011 album of the year. — WILLIAM MICHAEL SMITH

Previous post The Roadhouse Rant: Lubbock or Leave It