The Roadhouse Rant: Lubbock or Leave It

Lubbock is special, but you’d never know it from visiting Lubbock. I grew up there and lived there until my mid-20s, and over the course of my younger days I certainly knew about Buddy Holly, Waylon Jennings, and Mac Davis, and in a more remote way, Joe Ely, whom I considered some weird old rockabilly guy who my parents liked. But it never occurred to me that I lived in a town that could be considered especially important to music history. I attended the legendary Tornado Jam concerts, but my most vivid memory from one is of watching foam ooze from the mouth of some poor guy passed out drunk in the grass. In the late-80s and early-90s, I was playing in a metal band, working at the local rock station, and partying. A lot. And relative to the Texas country context, I was totally oblivious that anything special was happening. Cory Morrow and Pat Green were getting going, but I wasn’t a frat boy or a country fan at the time, so I didn’t notice.

It wasn’t until after I had left for Austin that it truly occurred to me that Lubbock might be kind of a big deal. I remember walking into the old Lubbock Or Leave It store in downtown Austin, where they gave me a free pin, just for being from Lubbock. (That was a neat place, and it was gone pretty soon thereafter — further proof that, just like everybody else who moves to Austin, I discovered it was a lot cooler here before I showed up.) I had managed to live the first two decades of my life in the home of Terry Allen and the Flatlanders without having any idea who they were. It wasn’t until ’91 or so, when I started playing in a cover band called Uncle Nasty with my good friend Jason Frankhouser, that I realized who Jimmie Dale Gilmore was. And that was only because Jason was dating (and now has a beautiful family with) Jimmie’s niece, Angela. I suppose it’s fair enough to attribute my ignorance to my own obliviousness, but the fact is that when I lived there, from the inside out, Lubbock didn’t exactly erupt with coolness.

And it doesn’t today, either. I’m a bit more realistic about it now, but in my initial years away from Lubbock, I found myself strangely nostalgic for the hometown that I had basically fled. So I’d go back for a visit, and quickly remember why I had left. Today, just about all of my close friends have scattered to other cities (more of them are here in Austin than there). Main Street Saloon and On Broadway, where I played some of my first shows, and the original Bash Riprock’s on Main Street and J. Patrick O’Malley’s, where Cory and Pat did their early gigs, are all history. Many of the dumpy Tech ghetto houses where we all used to burn all night have been replaced by new mixed-use developments and condos. But there are a few of the good old joints still standing, such as Lone Star Oyster Bar on 34th and the Texas Cafe (“The Spoon” to those in the know). Crickets on Broadway is a pretty good hang, and I’ve enjoyed the back bar at Cafe J. I still have not managed to set foot in the Blue Light, which has pretty well established itself as Lubbock’s primary Texas music headquarters, though I plan to remedy that at my next opportunity.

Still, you’d have thought the world was ending recently when Lubbock went wet. The prevailing conservative element that rules the South Plains generally manages to consistently “Keep Lubbock Lame.” If you’re not a Tech student or a professional WASP, there’s not really much going on for you in Lubbock. I don’t mean to bag too harshly on the old hometown here, but outside of family, a small group of old buddies, Taco Villa and Pedro’s Tamales, there’s not much that I miss. Pat Green once put it nicely: “Creativity tends to be inspired by an abundance of natural distractions, or a total absence of them, and that’s Lubbock.” My set was pretty wild back in the day, which I think was largely due to boredom. Terry Allen has had lots of metaphysical stuff to say about Lubbock, but then he’s a pretty metaphysical individual. Fiddler Richard Bowden has theorized that the famous Lubbock Lights may have something to do with the town’s creative streak. Jimmie Gilmore has insisted that there’s nothing special there, and that the preponderance of creative types that have flow from Lubbock is pure coincidence. The truth is somewhere in the midst of those views, but as much as I’d like to go with alien intervention, my take is that Lubbock’s oppressive cultural environment combines with the lack of jack shit to do, forcing Lubbockites of freer spirit to hunker down together for mutual support and dream up ways to amuse themselves: sometimes with drugs, sometimes with beer, sometimes with guitars. 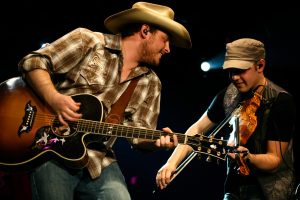 Josh Abbott is the latest big Lubbock success story, but in contrast to his more counter-culturally inclined predecessors, he appears to have played the established game there to success. He’s a pretty conservative guy who was raised by a pastor, and gained early momentum by marshalling the forces of Tech’s Greek community to pack his first shows at the Blue Light. I will admit — and Josh’s management loves to give me hell about this — that while I was always keen to support a Hub City homeboy, I didn’t really get his appeal at first. I was on the fence about “Good Night For Dancing” until I noticed that it drew girls like flies when I played it in the office. Then came “All Of A Sudden,” which I still consider one of the scene’s very best tunes over the last couple of years. I was totally not sold on “She’s Like Texas” — I’m not a big fan of songs that pander to Texas pride — but I can’t argue that it’s hooky as hell, and I’ll be damned if about 3,500 young ladies don’t vehemently and vocally disagree with my first impression on that one at every show. The new single, “Oh, Tonight,” featuring a great duet contribution by Kacey Musgraves, has the potential as I write this to elevate Josh to the big leagues. Josh’s music is not really aimed at us so-called “sophisticated” listeners. These are not groundbreaking, important songs, but that’s not to say they aren’t good songs.

I never perceived this in an overt way myself, but Josh has famously taken a lot of guff for being a Randy Rogers knockoff — an assertion that frankly seems a bit absurd in a music genre that is overflowing with coat-tailers. The ballcap and ensemble similarities aside, I don’t find Abbott’s music any more similar to Randy Rogers’ music than any other two Texas performers, and I’d further say that all the copycat talk comes across like sour grapes now that JAB is drawing similar crowds to RRB. So you can say what you want about Josh Abbott, but the facts are, he’s working his tail off, earning legions of fans and reaping the rewards.

In closing, I’ll say that I’m glad I’m not from Amarillo or something. I’m glad that people who are cool enough think it’s interesting to come from Lubbock, even though it’s really not. I still enjoy my trips back to Lubbock, and I still marvel at the Lubbock sky while I’m there. And in spite of their tendency to live in their own heads, Lubbock is full of good, good people. And best of all, at the end of my trip to Lubbock, I get to go to Austin.

Next post Jason Isbell and The 400 Unit: "Here We Rest"