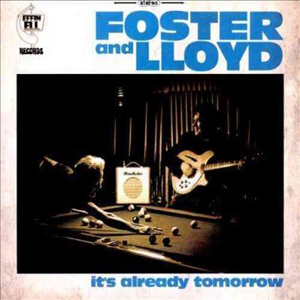 Twenty years later, the pair have reunited in their Byrds/Beatles bungalow out by Buck Owens’ place for a 13-song collection that moves through wide-eyed love songs for grown-ups who know better. Big-twang guitars, wide-open vocals, especially from the deeper-voiced Foster, whose timbre is now more hickory ‘n’ rawhide, and a dominant jangle make songs about girls, commitment, triumphs and overcoming challenges seem both euphoric and attainable. Sheer fun back when, wiser but no less euphoric now, for anyone who remembers — or anyone who wishes to reach for a more innocent roots-pop pleasure — It’s Already Tomorrow hits the note. Figure bass parts from Cheap Trick’s Tom Petersson and E Streeter Gary Tallent, mandolin from Sam Bush and steel from Lloyd Green means the pair wasn’t messing around. Whether a skulking shuffle on their Guy Clark co-write, “Picasso’s Mandolin,” the breezily d’amour-reckoning title track, the quietly tugging “When I Finally Let You Go” or the Bo Diddley-beat “Hidin’ Out,” the arrangements’ nubile nature, the guitar tones and the heart-over-heels sentiments go straight to one’s head. For a feel-good cocktail of the rush of being young tempered with a little hard-earned wisdom, this is post-modern jukebox country that draws on the Burritos, Robyn Hitchcck and the Raspberries in the name of something sweeter the second time around. — HOLLY GLEASON

Previous post Jason Isbell and The 400 Unit: "Here We Rest"