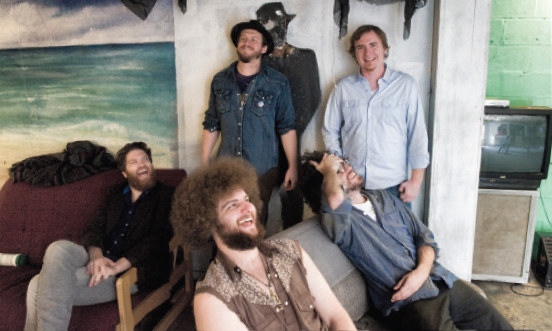 Like the Trishas, a band that doesn’t actually have a bona fide Trisha in it, there’s nary a Lucius in the Austin roots-rock band Uncle Lucius — and none of the five guys (sans burgers and fries) have an uncle named that, either. “Our standard answer is that we all had a simultaneous dream about a swamp lizard in the Louisiana bayou named Lucius,” says frontman Kevin Galloway. “But the real story is that some friends were talking about an eccentric southern gentleman of a grandpa they knew named Lucius.” So the name was co-opted and the eccentric grandpa simply downgraded to uncle status.

So who exactly are Uncle Lucius? They’re a collection of good ’ol Texas boys who all followed their individual musical muses to Austin town and found kindred spirits in each other. Galloway migrated to the capital city from Freeport in East Texas, where he cut his teeth on country music and dreamed of someday putting together a band of some sort. Like most musical newcomers to Austin, he trolled its many open mics, sharing his songs and getting the lay of the land. That’s how he met Hal Vorpahl, who also wrote songs and thumped a mighty bass, and together, they began to collaborate. The duo became a band a year or so later with the addition of lead guitarist Mike Carpenter, a son of Houston, who brought a bag of Hendrix, Santana and traditional blues licks to the mix. San Antonio native Josh Greco — sporting the best ’fro this side of Redfoo and/or Oscar Gamble — was enlisted to provide percussion when the band began recording 2009’s Pick Your Head Up and soon became a full-fledged, card-carrying Luciusitte rather than just a one-off session drummer.

The current Uncle Lucius lineup was completed when Kentucky refugee Jon Grossman caught their collective ears when they opened for a band he was playing in during a stop in Lexington. Or so he believed. “They told me later that they really couldn’t really hear me,” jokes Grossman. “Nevertheless, word got around.”

Just as word is now getting around about the Uncle Lucius sound. There’s nothing formulaic or predictable about it, as they draw on a wide range of influences, from smoldering Southern rock to throwback, horn-infused R&B to hippie-dippy psychedelia to soulful blues. The result is a musical Rorschach test for listeners. “When people say we sound like this or we sound like that, they’re describing the things that are familiar to them that they like,” suggests Galloway. “So people can grab onto our music in a familiar way. And then we convert them. We like to take those familiar aspects and make it modern, pushing the music forward.”

The band turned to R.S. Field, the noted sonic Svengali who has worked with the likes of Hayes Carll, Todd Snider, Billy Joe Shaver, Omar and the Howlers, Sonny Landreth, and John Mayall, to handle the bulk of the audio production wizardry on their new release, And You Are Me. His task was to help Uncle Lucius capture the vibrancy and spontaneity of their live performances in the studio. His presence also sharpened the band’s focus and professionalism.

“We turned our ‘Give-a-Shitter’ way up with him around,” Galloway says. “But we never felt like he was pushing us in any direction that we didn’t want to go. It was a real organic process.”

And You Are Me is a reflection of the increasingly all-for-one-one-for-all collaboration that characterizes both the band’s songwriting and their approach to recording.

“The album is more of a group grope, with everyone being involved,” says Galloway, who adds that the songs came together as a result of “close, close friends being very judgmental about each other’s music and negotiating out our little hang-ups. What comes across is one team, together, making music.”