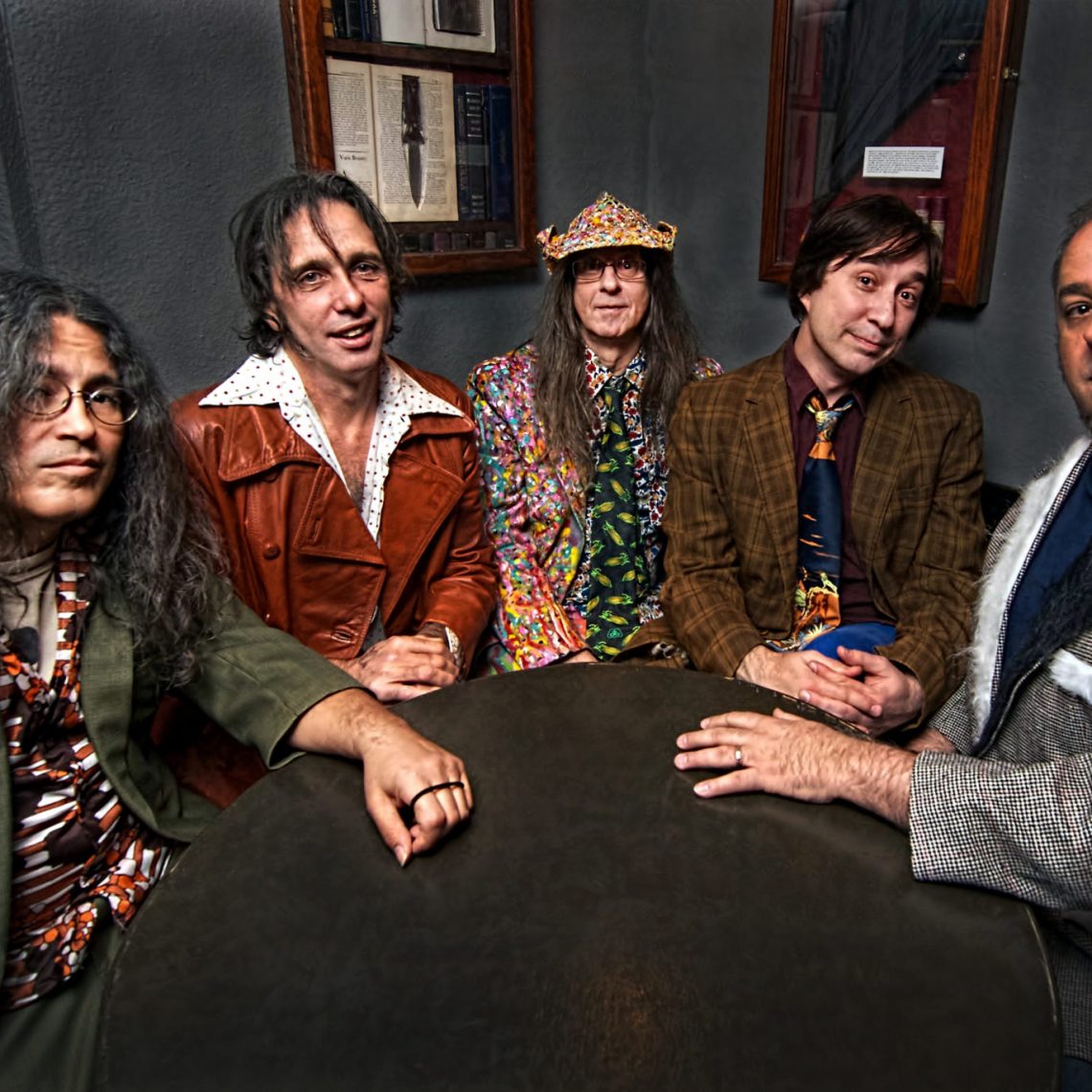 From Bob Wills to Buddy Holly and Mance Lipscomb to Santiago Jimenez — to name but a handful of examples — Texas has spawned a staggering amount of bona fide musical icons in the country, rock ’n’ roll, blues and Tejano fields. But the Lone Star State can also take proud credit for producing some of the, well frankly, weirdest stuff around. The out-there stylings of artists like Terry Allen, Roky Erickson, and the Butthole Surfers may not be for everybody, but there’s no denying either their Texasness nor the Texas-sized impact they’ve made on countless left-of-mainstream musical mavericks to come along in their wake. And right in the middle of that wildly uncompromising misfit mix, gleefully confronting and subverting all manner of conventional Texas values and traditions in song, are Austin’s recently resurgent kings of corn, the Hickoids. 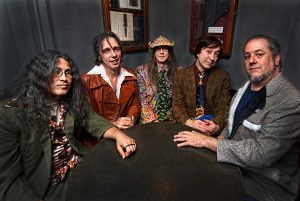 The Hickoids were born in the mid-80s, co-founded by singer Jeff Smith and guitarist Davy Jones and taking their name from Jones’ colorful description of a homeless man in a beat-up cowboy hat digging through the dumpster outside his apartment. The moniker fit the band’s unapologetically rude and irreverent mash-up of country and punk like a smelly glove, and the Hickoids’ 1985 debut, the Stuart Sullivan-produced We’re In It for the Corn, landed like a gauntlet in the face of the easily offended and genre purists alike. Over a mix of spaghetti western, whammy-bar-laced licks by the band’s other guitarist, Jukebox (nee Johnny Lee Jackson), and the manic punk-pounding of Jones’s big guitar and the rhythm section of brothers Dick and Arthur Hays, frontman Smith channeled an Iggy-meets-Lux-Interior-style rock ’n’ roll animalism to provide snarling commentary on subjects ranging from animal husbandry and one-armed farmers to the merits of living in “Hickoid heaven” and the dangers of “corntamination.”

It damn near killed them all. The band moved forward — sans Jukebox and his deranged vibrato — to unleash more madness, but by 1991 the original hayride to hell was over. As eloquently chronicled by Smith in the booklet accompanying the 2009 reissue of the band’s 1989 EP, Waltz Acrossdress Texas, the hard living shortened the lifespan of one member and left others incarcerated or just plain too freaky to deal with.

Out of the rubble of the Hickoids’ disbandment, Smith and Jones emerged as true rock ’n’ roll survivors, largely in part to eliminating the day-to-day habits that left the original band unworkable. But neither took a break from music while getting sober. Jones, who first came to the Austin scene a soldier from Killeen with his band the Ideals (“dorky underdogs,” as he describes them) before joining the Next, arguably one of the most important bands of the Raul’s-era punk scene in Austin, went on to lend his substantial guitar talents to Big Foot Chester and the Hank Street Ramblers. Smith fronted the Gay Sportscasters and the Swishbucklers. He also launched a San Antonio-based record label, Saustex, whose eclectic roster includes the likes of Pinata Protest, Churchwood, T. Tex Edwards and more.

But really, it was only a matter of time before the Hickoids raised their messy heads again.

“No matter what happened with the band,” muses Jones, “I never stopped being a Hickoid in my mind.” Out of all the bands he’s ever played in, he’s always considered the Hickoids home and Smith the perfect partner for his own vision of sonic mayhem (citing the frontman’s talent as an idea man for songs, concepts, and promotion — not to mention his self-effacing sense of humor.) 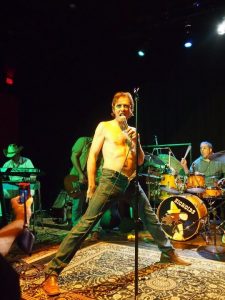 Since slowly pulling the group back together with a smattering of reunion gigs at the beginning of the century, Smith and Jones have wrangled that sonic mayhem into the studio a handful of times in recent years and instigated a full-on Hickoids revival. Their first harvest from the new era was Kicking It with the Twits, an eight-song mini album of covers showing off their debt to British rockers ranging from the Who and Rolling Stones to Mott the Hoople, Slade, the Damned, Brian Eno, and even Sir Elton John (their knock-out version of “Benny and the Jets” scored the Hickoids some solid underground radio airplay.) The glam-rock element of the band is often overlooked in favor of their love/hate relationship with country western themes and sounds, but for Smith, known to some as the “Thin White Duke of Hazzard,” Twits was his version of David Bowie’s own covers album, 1973’s Pin Ups.

Returning to recorded work with a covers disc was a way of getting the band’s collective feet wet and allowing a solid line up to gel. In 2013, the Hickoids delivered their first full album of originals since their original ’80s heyday, and the title alone proves that they’re as corntaminated as ever: Hairy Chafin’ Ape Suit.

“We had the title forever,” explains Smith. “It’s one of those things where you just string some words together and it sounds amusing. It also echoed our derision for Harry Chapin — though I’m sure he was a nice man.” 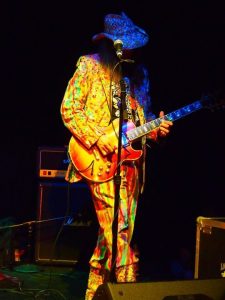 Hairy Chafin’ Ape Suit is a cohesive, hard-knockin’ and rootsy record that delivers the kind of irreverent commentary and big-guitar bang one expects from this gang of rockin’ road warriors. “Cool Arrow,” a play on a derisive Spanish term that should need no explanation, places some Augie Meyers-worthy South Texas Vox organ over a pumping polka groove. “Mo Hair” is an ode to male-pattern baldness over a titanic guitar crunch. “Stop It, You’re Killing Me,” based on a phrase often used by the late Ram Ayala, the proprietor of the legendary San Antonio punk den Taco Land, is a performance piece about a sheltered Northside boy on a sexual adventure. And “Working Man’s Friend” and “Talking Hot Pants Blues” both pay tribute to dearly departed original Hickoids bassist Dick Hays, who passed away in 2001. (Sadly, just before this issue went to press, Smith reported on his Facebook page that former guitarist Jukebox died in Colorado in mid-November. “I didn’t always like him but I surely loved him,” Smith wrote. “I’m kind of in shock … R.I.P. amigo.”)

In addition to their recent studio work (released on Saustex, naturally), the Hickoids have also returned to the road on a consistent basis and even made one well-received trip over the pond. And with big gigs in the works opening for longtime Hickoid fans the Old 97’s, including New Year’s Eve at the House of Blues in Dallas, the band is primed to reach more people with their singular brand of Texas cowpunk than ever before. Founding members Smith and Jones are both better than ever, bringing a heavy dose of rock ’n’ roll theater and punk power to their chaos-driven live shows. And the rest of the band — now featuring veteran rockers Rice Moorehead on bass, Lance Farley on drums, and Tom Trusnovic on guitar — is just as solid, a testament both to their years of collective experience and the kind of regular rehearsal schedule that never quite caught on with the ’80s-era Hickoids.

Hell, these days, the Hickoids have their act so together, they even have their own hometown festival. Maybe you’ve heard of it. Goes by the acronym “ACL” — as in, the Austin Corn Lover’s Fiesta. And in classic cheeky Hickoids fashion, it’s held at the same time of year when superstars like the Eagles, Depeche Mode, and Lionel Richie flock to Austin to play for thousands in the park — offering a very local-friendly, street-level alternative to the Zilker madness. Now in its fourth year, this October’s ACL Fiesta was the best yet, with packed shows at the Hole in the Wall, Whitehorse, and Longbranch Saloon featuring a diverse lineup of roots rockers (the Old 97’s, Rosie Flores, Two Hoots and a Holler), legendary punks (the Dicks, fronted by Scratch Acid’s David Yow), and a host of regional acts like Purple Stickpin, the Poor Dumb Bastards, the Pocket Fishermen, and of course, the Hickoids themselves.

And though Smith still stalks the stage like a greedy tiger out to corrupt your daughters, there’s no hiding the sincere generosity of spirit and commitment to community that inspired the ACL Fiesta in the first place.

“The Corn Lover’s Fiesta started, obviously, as a dig at the ‘other ACL’ and a means to promote the Hickoids and other bands on the label,” Smith concedes. “But the rewards aren’t monetary. The rewards are in seeing people connect to and appreciate Texas bands that I love.”