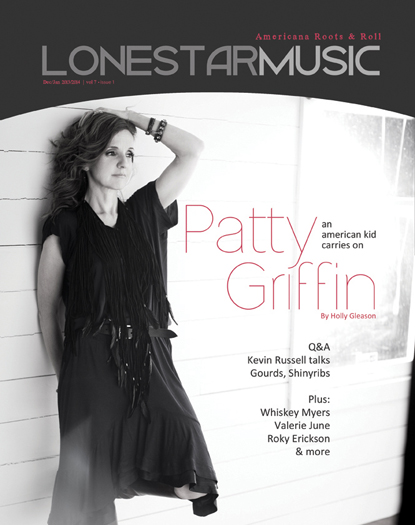 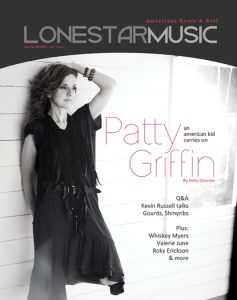 Well well now — look who went out and got themselves a fresh new ‘do’ just in time for the new year! If you’re a regular or longtime reader of LoneStarMusic, you probably did a double take when you first saw the cover of this issue — and not just because of that stunning photo of the inimitable Patty Griffin. You see, as proud as we’ve always been of our creative director Melissa Webb’s award-winning layouts, in October we tasked her with the challenge of giving the whole magazine, from the masthead on down, a fresh new look and feel to reflect our renewed commitment to producing the kind of quality magazine that we feel the artists and fans that make up the vibrant and ever-growing Americana music scene deserve. From our very first glimpse at Melissa’s redesign, we knew she’d outdone herself once again. And as strikingly different as this issue looks, it’s merely a glimpse of what’s to come. Personally, I can’t wait to see the refinements and flourishes — from subtle to bold — that I know she still has up her creative sleeves going forward.

Amidst all these changes, though, rest assured that one thing that hasn’t changed — and won’t be changing — is our in-depth coverage of the artists and music that not only shape and define the Texas and broader Americana music scene, but that inspire us to keep this magazine (not to mention both LoneStarMusic.com and our brick-and-mortar record store in San Marcos, Texas, Superfly’s Lone Star Music Emporium) going strong. As editor, I take pride in finding the right writers for our stories, and especially in the case of our cover stories, allowing them the freedom to really dig in and explore their subjects with a thoroughness and sense of definitive scope that one doesn’t find all that often anymore in most music magazines. Take, for example, our cover feature in this issue on Patty Griffin, by Holly Gleason. The fact that Griffin released not one but two of 2013’s best albums (American Kid and Silver Bell, the later recorded more than a decade ago, only to languish for years in her old record label’s vaults) certainly makes her a timely candidate for the cover of our year-end issue, but Gleason’s story traces the artist’s entire journey, as candidly recounted by Griffin herself along with revelatory insights from noted collaborators and admirers like Buddy Miller, author Silas House, and filmmaker Cameron Crowe. I think it’s a piece that longtime Griffin fans will want to save and savor, and that even those not yet familiar with her work (though I can’t imagine there being that many of the later amongst our regular readers) will find a compelling read.

In addition to our Griffin cover story, this issue also has regular contributor Lynne Margolis’ terrific feature on Memphis’ Valerie June, one of the most intriguing new faces in “Americana roots ’n’ roll” (to borrow our new tagline) out there today, along with profiles on such diverse Texas-based acts as rockers Whiskey Myers, indie-folksters Wild Child, cowpunk legends the Hickoids, Texas country/Red Dirt favorites Cody Canada and Brandon Rhyder, and up-and-coming singer-songwriter Ali Holder. For our Q&A, Rob Patterson talks to Kevin Russell about his passion for Shinyribs and the Gourds’ “indefinite hiatus”; guest columnist Gurf Morlix waxes poetic about one of his all-time favorite albums, Marty Robbins’ Gun Fighter Ballads and Trail Songs; and Scott Schinder’s guided tour through the psychedelic sounds of Texas legend Roky Erickson’s catalog makes for one of my favorite “Mr. Record Man” installments to date. Throw in a bunch of reviews and even a new section, “LSM Playlists” (the first installment of which rounds up our picks for the best Americana releases of 2013), and you’ve got a lot of musical ground to cover between these covers. I hope you have as much fun reading and listening to it all as we did. And last but not least, on behalf of all of us here at LSM — Happy New Year!