In Profile: Micky & the Motorcars Bolstered by a brand new cast of bandmates — and a little brotherly love in the studio — Micky and Gary Braun soar with "Hearts From Above." 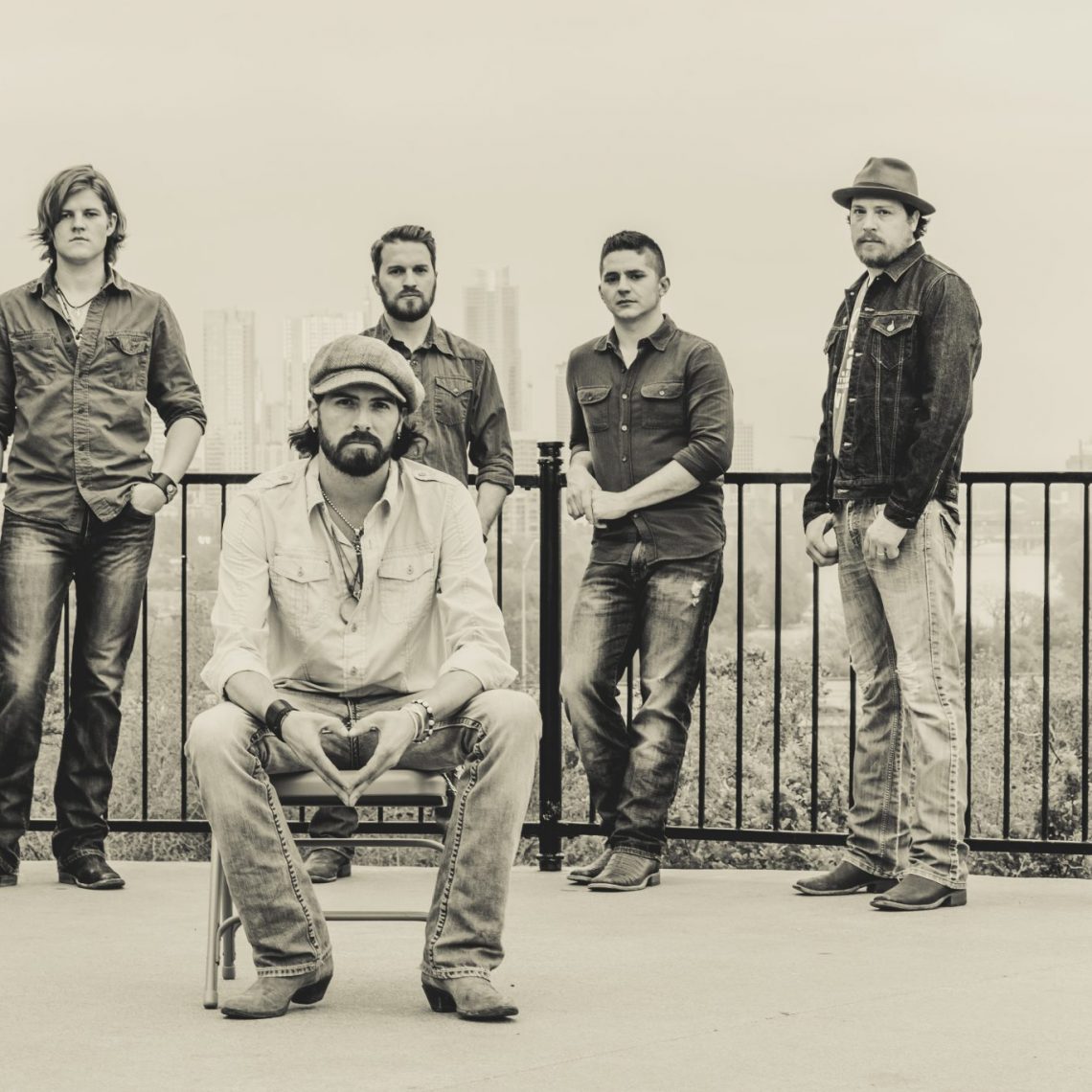 “This is kind of the calm before the storm … or before the tour, anyhow,” says Micky Braun of Micky & the Motorcars, squeezing in a quick phone interview in what little downtime he has left before hitting the road again. “You actually caught me at home, and that’s gonna be hard to do for a while. We’ve got three and a half weeks booked just for the West Coast leg of the deal.”

The area code on the incoming call might indicate Austin, Texas, but with a guy like Braun it’s good to have some clarification as to which “home” he’s talking about. He gets his mail in Austin, of course, but the ancestral Braun family home up in Idaho is steadfastly in his heart and history. And the road and the stage are home, too, which sounds clichéd but bears extra mention since even the hardiest of musical road warriors probably didn’t start their ride as early as Micky and his brother and bandmate, Gary Braun (more on that later).

Gary’s been rounding out Micky’s creativity as a co-writer, multi- instrumentalist, and fellow vocalist from the get-go, but the rest of the Motorcars lineup has been in serious flux since their last album, 2011’s solid Raise My Glass, hit the shelves. So much so, in fact, that the Motorcars’ new album, Hearts From Above, marks the studio debut of what could technically be deemed a brand new band.

“Going into the studio on this one, things had really changed for us,” Micky explains. “The bass player was new, the drummer was new, and the lead guitarist, too. There was a lot of comings and goings, stuff that shook us up. We’d lost a good friend, our old bass player Mark McCoy, to a tragic [boating] accident.”

That was back in 2012, after McCoy had left the band to move back home to Idaho. His replacement, Joe Fladger, was the first new member added to the fold, followed soon after by drummer Bobby Paugh and guitarist Dustin Schaefer. The Brauns road-tested the new lineup for months before booking studio time, which is why Hearts From Above as a whole sounds too taunt, self-assured, and focused to be mistaken for the work of anything but a seasoned outfit. But the infusion of new blood also gives both the record and the band’s live shows an invigorating sense of urgency and optimism that makes the Motorcars sound positively reborn, bringing new life to a sound that Micky and Gary have been cultivating for years and pushing their songwriting to new levels.

Sometimes that songwriting takes grandiose grabs at history (“From Where the Sun Now Stands,” which tackles the viewpoint of Chief Joseph, the iconic Native American leader from the turn- of-the-century Pacific Northwest); other times, it rallies rebels to righteousness (“Tonight We Ride.”) But mostly it just takes a heartily adult swing at the ups and downs of love — and on Hearts From Above moreso than any other album in the band’s catalog, the “ups” are winning. And for good reason: in contrast to most of the songs on the darker-themed Raise My Glass, which Micky wrote while coming to grips with a breakup, the new album finds his proverbial glass more than half full.

“Well, I’ve got a fiancé now,” he explains. “And I guess it shows there in the songs. It felt different, like it was the first time I was writing all these love songs from the point of view of someone who’s happy and positive about it.

“And she’s a speech pathologist,” he adds, “so I think she’s even got me enunciating these songs better.”

Asked which of the songs spoke most directly from his current lot in life, Micky offers up the big-hearted title track. “You know, I got the idea for that one walking home from the Continental Club [in Austin] after going to see Alejandro Escovedo on a weeknight, and it was such a damn good show and I was just in a great mood, a happy place, excited to be writing and recording something new again.”

Escovedo’s influence on Micky & the Motorcars is evidenced even more directly on Hearts From Above’s lone cover, the searching “Sister Lost Soul.” The song has actually been a regular standout on the band’s setlist for years, ever since Micky fell in love with Escovedo’s original on his 2008 album, Real Animal. “That’s probably the only song on the record we’ve been playing on the road for a long time, the cover,” he says. “The original stuff, I like to keep it under wraps until the record’s almost out. I’m not worried about the audience getting tired of it; I just don’t want the band to be burned out on it. But that Alejandro song, I just love it … I would’ve recorded it the year he put it out but I figured it’d make more sense to wait a little while.”

Hearts From Above also bears the imprint of a few of the Motorcars’ peers and friends closer in age to the Braun brothers. Brian Keane lent some of his signature wit to a trio of co-writes, while Jason Eady, recently acclaimed for his hard-country material, helped Micky pen the album’s punchiest and hardest-rocking number, “Hurt Again.”

“We were running through that one in the studio, and Willy perked up and asked, ‘Who’s the cowriter on that one again?’” Micky recalls with a chuckle. “He thought I was kidding him about Jason.”

That Willy would of course be Micky and Gary’s older brother Willy Braun, who in addition to co-writing a handful of songs on Hearts From Above (including the title track) also produced the album. It was his first time working with the Motorcars in that fashion, though the brothers are no strangers to collaboration. Willy’s own Austin-based roots-rock band, Reckless Kelly — which features yet another older Braun brother in multi-instrumentalist Cody — has shared many a stage and tour with Micky & the Motorcars, and all four Brauns have played music together in one form or fashion since childhood. Their father, the well-travelled Idaho singer-songwriter Muzzie Braun, not only raised them on a blend of hardcore country and progressive folk rock but recruited each of them into his band. Instrument lessons started shortly after toilet training, and touring commenced around the time the training wheels came off the bikes. The family band played rodeo, festival, and small venue gigs all over the American West and even landed appearances on The Tonight Show.

When Willy and Cody got old and brash enough to split from the nest and migrate down to Texas, it was only a matter of time before Micky and Gary set out on their own, too. Shortly after the turn of the millennium they were Austinites themselves, and by 2003 they were releasing Which Way From Here, the first in a string of increasingly tuneful and self-assured albums. Comparisons to Reckless were inevitable, given that the leaders of both bands shared not only the same genes but also the same early influences — not just their dad Muzzie and his old running buddy, Pinto Bennett, but also Texas stalwarts like Escovedo, Joe Ely, and Steve Earle, along with such ’60s innovators as the Byrds and the Beatles. All of that is still in the mix, consciously or otherwise, but five studio albums and countless gigs down the line, Micky and Gary have gotten to the point where first and foremost, they just sound like Micky & the Motorcars.

“I’m glad to say we’re at the point in our career where everything’s personal, in a good kind of way,” says Micky. “The writing is personal, sure, but so’s the tour itself. It’s another round of seeing all these people and places that have helped us out before. It’s hoping people come across us on Pandora and stuff like that; it might not pay much but it also doesn’t cost us anything and it puts asses in seats at the shows. We’re fortunate … fans help, radio helps, the Internet helps. Radio stations with an ‘Americana Hour’ or ‘Texas Hour’ or whatever help a lot.”

Great records help, too. And the Motorcars just made one.