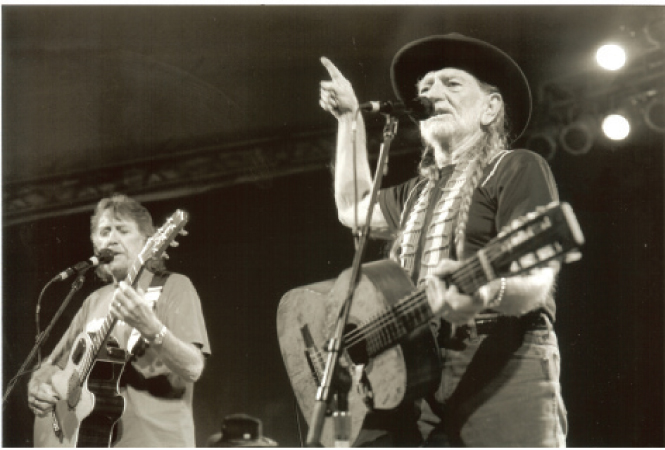 Former Willie Nelson (and Merle Haggard) guitarist, who retired in 2008, missed playing with the Family Band but not “the bus rides.”

“He was with us for over 34 years,” recalled Paul English. “He will be greatly missed by everyone.”

English, longtime drummer for Willie Nelson, was talking about friend Jody Payne, who passed away on Aug. 10, at 77 years old. Payne played guitar in Nelson’s band from November 1973 until he retired from the road in late 2008. He lived in Stapleton, Ala., with his wife, Vicki, and was enjoying his retirement at the time of his death. He had been feeling ill on the morning of Aug. 9 and finally asked his wife to call an ambulance, and passed away early the next morning from cardiac complications. 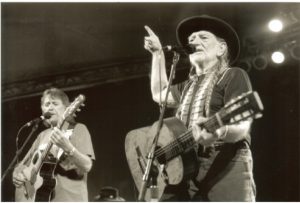 Shortly after the news was made public, the following simple message was posted on Nelson’s Facebook page: “Sad to report that Jody Payne passed away. Seriously getting the band back together in heaven now. Jody Payne with Bee Spears and Poodie.” Bass player Dan “Bee” Spears died after a fall at his property in Nashville in December 2011; Randall “Poodie” Locke, the band’s beloved stage manager (and owner of Poodie’s Hilltop Bar & Grill in Spicewood, Texas) died in May 2009.

Payne and Vicki, his second wife, had one son together, Austin Payne, born in 1981. Before Vicki he was married to country singer Sammi Smith, with whom he had another son, Waylon Payne, in 1972. Payne and Smith (who died in 2005) divorced before the end of the ’70s, but not before the union helped land him his most famous gig.

“We hired Sammi Smith to come sing with us, but she never showed up at the gig,” said English. “But her husband did. That’s how we hired Jody — he was married to Sammi at the time. He played the show and we decided to keep him. Things like that happen in our band all the time. I remember when Mickey Raphael joined the band, he just started sitting in with us. Willie asked me how much we were paying him. I said ‘We aren’t paying him anything.’ Willie just grinned and said, ‘Hire him, and double his salary.’ That’s how it was with Jody. If Willie likes you, you’re in the band.”

The Kentucky-born guitarist learned to play at an early age, taking lessons from such legendary pickers as Merle Travis and Charlie Monroe. He and his sister, Imogene Payne, sang together when they were 5 and 6 years old. He sang and played the mandolin for Imogene’s first-year graduation and that was the beginning of his music career. At the ripe old age of 10 he joined his sister to sing on WHIR radio in Danville, Ken. In 1951, Payne joined Charlie Monroe’s bluegrass band but left when his family moved to Cincinnati, Ohio. He spent two years in the Army after being drafted in 1958. After his discharge he moved to Detroit and started playing at the West Fort Tavern. Before long he was on the road playing in Merle Haggard’s band.

Payne first met Nelson in 1962 in Detroit when Ray Price, who Nelson was playing bass for at the time, passed through town. Their paths would cross many times in the following years before Payne joined the Family Band.

“My job with Willie was to know when not to play,” Payne once said. “I just held things in place and let Willie do what he does best, which is to let his music take him on a new journey every night.”

Payne will obviously be best remembered by many for his work with Nelson, but friends and family also have the memories of a fun-loving man who just lived to play music. Whether it was onstage in front of thousands of fans or teaching guitar at Picker’s Paradise in Stapleton, Payne truly loved his job. After he retired from the road, Payne told friends that he missed playing in the band but didn’t miss the bus rides. In addition to teaching guitar lessons, he would often sit in with friends at an occasional gig, but mostly he just enjoyed his life at home with Vicki.

“We were on the road when we got the call about Jody, so we weren’t able to go the funeral,” said English. “We just all really miss him. He was such a great guy and good friend.”