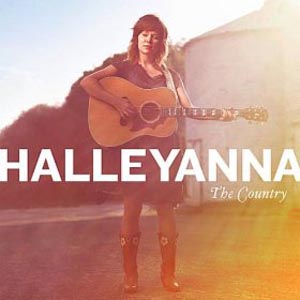 When you’ve spent most of your formative years in a place that rightly bills itself as a museum to Texas music, it’s a good bet that you’ve learned a thing or two along the way about the finer points of songcraft. HalleyAnna Finlay — whose father, Kent, owns Cheatham Street Warehouse in San Marcos, where folks such as George Strait, Todd Snider, Terri Hendrix and Randy Rogers all launched their careers — soaked up every songwriting lesson that lingers in the dusty atmosphere of that grand old place and puts them on display on her impressive debut, The Country. And rightly named it ’tis, because HalleyAnna (who’s elected to go the first-name only route) sure delivers that old school country thang. Hers is voice that may or may not grow on you, but there’s no question that this gal’s certainly got a knack for those crying-in-your-beer/getting-over-no-good-you songs. On “I’d Rather Be a Memory,” she delivers the Patsy Cline or Patty Loveless-worthy line “I’d rather be a memory lyin’ sweetly on your mind than a woman by your side that you’ve forgot” with conviction and resigned heartache. She plays the hopeful, dreamy flirt on “So Heavy” and then goes a tad quirky with “Making a List for You,” enumerating a playful series of honey-dos in the brassy manner of the Mardi Gras trumpet that punctuates her point. And on “Back in Your Arms Again,” the finely appointed slow waltz, she acknowledges the “power of songs we once danced to” to pull even the most lovelorn back together again. HalleyAnna adds her voice to those many Texans that just have to sing for the song’s sake, and she’s getting it right from the get-go. — GLEASON BOOTH