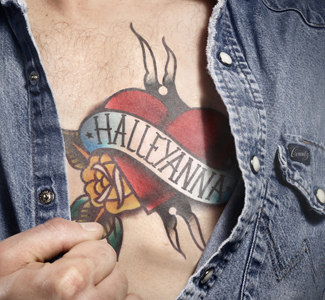 Given her stubborn first-name-only shtick, compounded with her decision to self-title her second album and spell it on the cover with a photo of her name emblazoned on a tattoo across a dude’s chest, San Marcos’ HalleyAnna (nee Finlay) seems a tad over-obsessed with standing out from the crowd of female singer-songwriters. She really shouldn’t be that concerned, though, because as shown both here and on her 2011 debut, The Country, nobody else in Texas (or anywhere, for that matter) has a voice quite like hers, a slurry, mischievous drawl that flips from hard-core twang to playful quirk to heart-rending vulnerability at the twist of a lyric. She’s no wallflower of a songwriter, either: she has an especially endearing knack for crafting twisty, eccentric melodies (as best demonstrated on the whimsical “The Bee” and the achingly bittersweet “Out of the Blue”), and her winsome sense of humor comes to the foreground in “Tattoo” (whose punch line inspired the album cover). And’s she’s just as effective at getting her unique personality across when she plays it straight, both on up-tempo shuffles like “The Letter” and on last-call weepers like “Playing Along.” Bottom line: Ain’t nobody who hears HalleyAnna’s HalleyAnna is going to forget her name, but it’s her talent that really leaves a mark. — RICHARD SKANSE